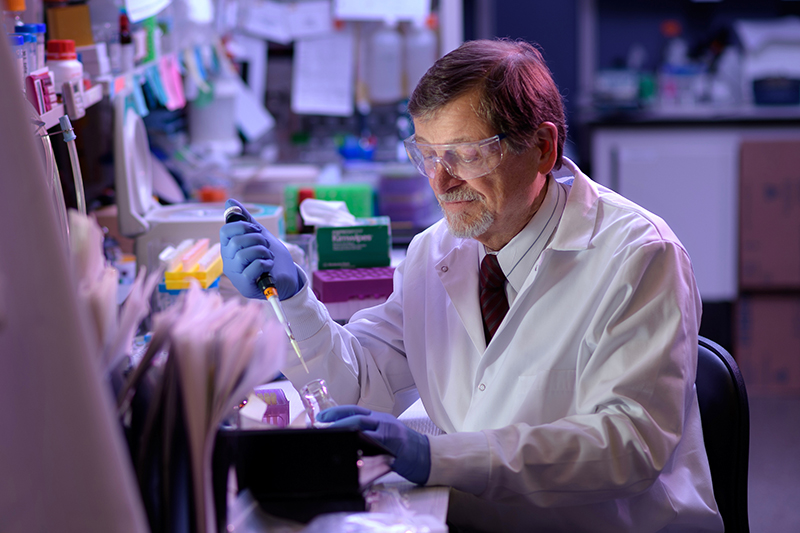 A new approach to cancer immunotherapy has the potential to be a universal treatment for solid tumors, according to an article published by Purdue University researchers in Cancer Research, a journal published by the American Association for Cancer Research (AACR).

In their article, two Purdue scientists, Philip Low, Ph.D., Purdue’s Presidential Scholar for Drug Discovery, and Ralph C. Corley Distinguished Professor of Chemistry, and Timothy Ratliff, Ph.D., the Robert Wallace Miller Director of the Purdue Center for Cancer Research and Distinguished Professor of Comparative Pathobiology, describe how they developed and tested a new treatment that works not by attacking the cancer cells themselves, but by focusing on immune system cells that, ironically, feed the tumor and block other immune system cells from destroying it.

While immunotherapies of tumors have demonstrated promise for altering the progression of malignancies, immunotherapies have been limited by an immunosuppressive tumor microenvironment (TME) that prevents infiltrating immune cells from performing their anti-cancer functions.

Simple explanation
Low explained that their approach targets immune cells that the body uses to put the brakes on immune responses. In other situations, after an illness or injury, the body employs these immune suppressor cells to stop the normal healing response in order to prevent the response from careening out of control, just as you would use brakes in a car.

However, in the treatment of malignancies, these cells “hit the brakes” at the wrong time and stop the body’s own defenses from killing the tumor, resulting in an unwelcome and disastrous effect.

“We can reprogram the immune cells within the tumor to help kill the tumor instead of allowing these cells to help the tumor grow,” Low noted.

“It’s just been realized recently that as a global approach to eradicating a solid tumor, we need to also treat the healthy, non-malignant cells in the tumor,” he added.

Depending on the type of cancer, 30%-80% of the cells in a solid tumor are not cancer cells and are used in normal functions in other tissues.

“The difference — and this is a very important difference — is that after these cells infiltrate a solid tumor mass, they are retrained by the cancer cells to facilitate tumor growth,” he said.

Research details
To targets immune cells that the body uses to put the brakes on immune responses, Low and his team explored the properties of myeloid-derived suppressor cells (MDSC) and tumor-associated macrophages (TAM) that inhibit T-cells via the release of immunosuppressive cytokines and engagement of checkpoint receptors from freshly isolated mouse and human tumors to find that an immunosuppressive subset of these cells can be distinguished from the non-immunosuppressive population by its upregulation of folate receptor beta (FRβ) within the tumor microenvironment and its restriction to the tumor microenvironment.

In simple terms, the researchers conjugated an anti-cancer drug that would normally be too toxic for human use, to folate, a type of vitamin B (vitamin B9). Almost no normal cells have a receptor for the folate, so it passes on through the body. However, in contrast, certain cancer-associated immune cells do.

“We use [..] folate to target attached drugs specifically to these nonmalignant cells within a tumor mass that, unfortunately, promote tumor growth. These tumor-associated macrophages love folate,” Low noted.

“They have an enormous appetite for it. They take it up right away, and if they don’t, the compound passes in the urine within about 30 minutes. So, we’re using folate as a kind of Trojan horse to trick the tumor-promoting immune cells into eating a drug that will reprogram them into tumor-fighting immune cells.”

Widely applicable
The study results demonstrated that their approach offered a widely applicable strategy across tumor types for reprogramming myeloid-derived suppressor cells and tumor-associated macrophages into anti-tumorigenic immune cells using a drug that would otherwise be too toxic to administer systemically.

In addition, the study establishes FRβ as the first marker that distinguishes immunosuppressive from non-immunosuppressive subsets of myeloid-derived suppressor cells and tumor-associated macrophages.

Based on the results, Low and Ratliff concluded that because all solid tumors accumulate myeloid-derived suppressor cells and tumor-associated macrophages, a general strategy to both identifies and reprogram these cells should be broadly applied in the characterization and treatment of multiple tumors.

Drug development
Low explained that part of the drug development effort will be to ensure that the drug payload, which would be lethal to a patient by itself, is released solely within the tumor-promoting macrophage cells.

“There’s a lot of molecular design and chemistry to optimize this combination,” he noted.

“We are designing them so that if they are not taken up by the cancer-promoting cells right away, then they are out of there. If the drug isn’t used right away, we want it gone.”

More universal
According to Purdue’s Timothy Ratliff, Ph.D., this treatment may prove to be more universally effective than current cancer immunotherapies.

“There are therapeutic antibodies that are used on some types of cancer. And many people have heard of checkpoint immunotherapies, which block certain parts of the immune response,” Ratliff said.

“When I talk to groups, I always point out that former President Jimmy Carter had metastatic brain cancer, and he went through immunotherapy, and it eliminated his cancer for him. But the problem is that only about 20%  of the patients actually respond. So, we need to take a different approach to modulate the immune response,” Ratliff explained.

Targeting cels that bost tumor growth
Ratliff noted that the folate-targeted approach is exciting because it is the first research project that has found a way to target the cells that boost tumor growth within the tumor environment.

“These are cells that are important to the tumors, but they aren’t the tumor cells themselves,” he said.

“By targeting these myeloid cells within the tumor, we have a universal process because these cells are present in all of the solid tumors,” Ratliff concluded.

As director of the Purdue University Center for Cancer Research, Ratliff co-founded Boilermaker Health Innovations, a certified nonprofit that helps fund Purdue-discovered drugs through human clinical trials. The nonprofit provides necessary funds for scientists helping them through the often-costly early research stages of a treatment or product before the clinical trial process.

Often, investigational compounds that make it through a Phase I trial can be sold to an established pharmaceutical manufacturer or spun off into a for-profit company.

Success story
One of the center’s most recognized success stories is Endocyte, a company originating from the work developing a folic acid-based drug delivery system, referred to as folate targeting, originating from the laboratory of Philip Low, who is also a co-founder of the Boilermaker Health Innovations, in collaboration with Christopher Leamon, Ph.D., Vice President of Discovery Research at Advanced Accelerator Applications (previously Endocyte).

Low’s research, which focuses on providing direct-targeted treatment to diseased cells through the creation of small molecules, helped the biopharmaceutical company reach its $2.2 billion value, leading to the company being acquired by Novartis.

New technology
Low said the new immunotherapy treatment could be available to patients within a decade.

“On average, this usually takes 10 years, but we have a small team and we’re aggressive. So, I think there’s a reasonable chance this could make it to the public within seven years or something like that,” he said.

Low also said that the development and testing of a possible drug would probably cost a couple hundred million dollars, at the very least.