Home A Novel Technology based on Somatic Hypermutation (SHM)

A Novel Technology based on Somatic Hypermutation (SHM)

Somatic hypermutation is a key mechanism in generating antibody diversity. An innovative platform technology developed by AnaptysBio, a clinical-stage biotechnology company, replicates the natural process of somatic hypermutation or SHM, embedded within the human immune system to rapidly develop a diverse range of therapeutic-grade antibodies in vitro.

SHM is a critical, endogenous process that generates the essential antibody diversity required to develop a natural immune response to pathogens. The human genomes encode a limited number of antibody genes, which are insufficient to generate antibodies against the wide variety of foreign pathogens encountered from the external environment. SHM enables the immune system to expand the limited diversity encoded within the genomes to the billions of antibody specificities required to defend ourselves against external pathogens.[1] 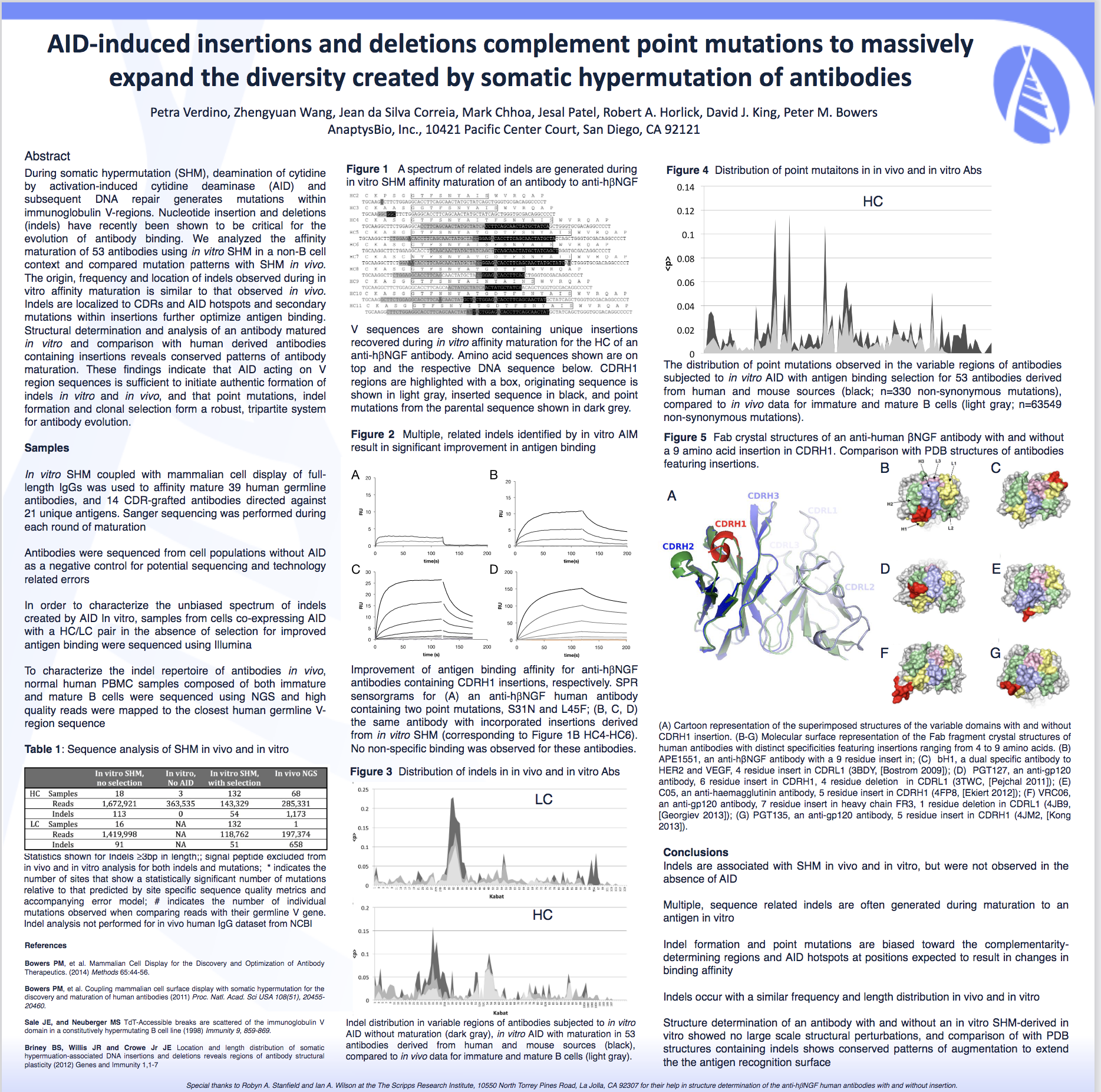 The key enzyme required for SHM is called activation-induced cytidine deaminase, or AID.

Activation-induced cytidine deaminase (AID) is the first of a complex series of proteins that introduce these point mutations into variable regions of the Ig genes.

AID has been genetically conserved throughout mammalian biology and is required for the non-random mutagenesis pattern associated with SHM.

AID deaminates deoxycytidine residues in single-stranded DNA to deoxyuridines, which are then processed by DNA replication, base excision repair (BER), or mismatch repair (MMR). In germinal center B cells, MMR, BER, and other factors are diverted from their normal roles in preserving genomic integrity to increase diversity within the Ig locus. Both AID and these components of an emerging error-prone mutasome are regulated on many levels by complex mechanisms that are only beginning to be elucidated.[2][3][4]

AID is specifically expressed by B cells after contact with a foreign pathogen and modifies antibody sequences in a non-random fashion. Through SHM, B cells evolve antibodies with the potency and specificity required to clear the foreign pathogen. However, within the in vivo environment, SHM does not generally progress to the creation of high potency antibodies or develop antibodies against the body’s own proteins.[2][3][4]

By coupling in vitro SHM with AnaptysBio mammalian cell system that simultaneously displays and secretes antibodies, scientists believe that the SHM platform is able to rapidly identify and mature antibodies with desired functional activity to high potency while simultaneously mitigating the risks associated with manufacturing.

Scientists at AnaptysBio have introduced AID into mammalian cells to replicate the non-random mutagenesis SHM pattern observed within B cells in vivo. Starting with a library of either fully human or humanized antibodies, the platform technology generates AID-based variants of the starting antibody library throughout the process.

Scientists have demonstrated that the pattern of mutagenesis observed in vitro using the company’s platform technology closely mimics the pattern observed among in vivo generated antibodies, thereby increasing confidence that antibodies generated by their platform will be tolerated when used as therapeutic drugs in humans.

By selecting antibodies based on their antigen-binding from the broad antibody library population the SHM platform develops, AnaptysBio’s scientists were able to develop antibodies to levels that are required for therapeutic use.

This approach allows scientists to rapidly generate antibodies with high binding potency against a target. Through this approach, AnaptysBio’s scientists have successfully generated therapeutic antibody product candidates to more than 25 targets, including targets that have been challenging for competing antibody technology platforms.

Each evolving antibody is expressed within the SHM-active mammalian cell to concurrently (i) display the evolved antibody on the cell surface to permit cell sorting selection for potency properties while (ii) the same antibody is secreted into the extracellular media at sufficient quantities to permit functional assays to be conducted. In this manner, the evolving antibodies expressed by each transfected cell are assessed in a high-throughput fashion for the desired functional activity relevant to the therapeutic mechanism.

Dostarlimab is the first AnaptysBio-generated antibody to obtain approval by the U.S. Food and Drug Administration (FDA) for the treatment of adult patients with mismatch repair-deficient (dMMR) recurrent or advanced solid tumors, as determined by the FDA-approved Ventana MMR RxDx panel test, that have progressed on or following prior treatment and who have no satisfactory alternative treatment options. This is the second indication for dostarlimab to be approved by the FDA in 2021.

Dostarlimab is also being developed by GSK for the treatment of other tumor types and treatment settings, including currently ongoing phase III trials in recurrent or primary advanced endometrial cancer in combination with chemotherapy standard of care (RUBY) and the phase III FIRST study of platinum-based therapy with dostarlimab and niraparib versus standard of care platinum-based therapy as first-line treatment of stage III or IV non-mucinous epithelial ovarian cancer. In addition, dostarlimab is being evaluated as monotherapy and in combination therapy across multiple tumor types and other cancers, including platinum-resistant ovarian cancer, non-small cell lung cancer, multiple myeloma, and melanoma.