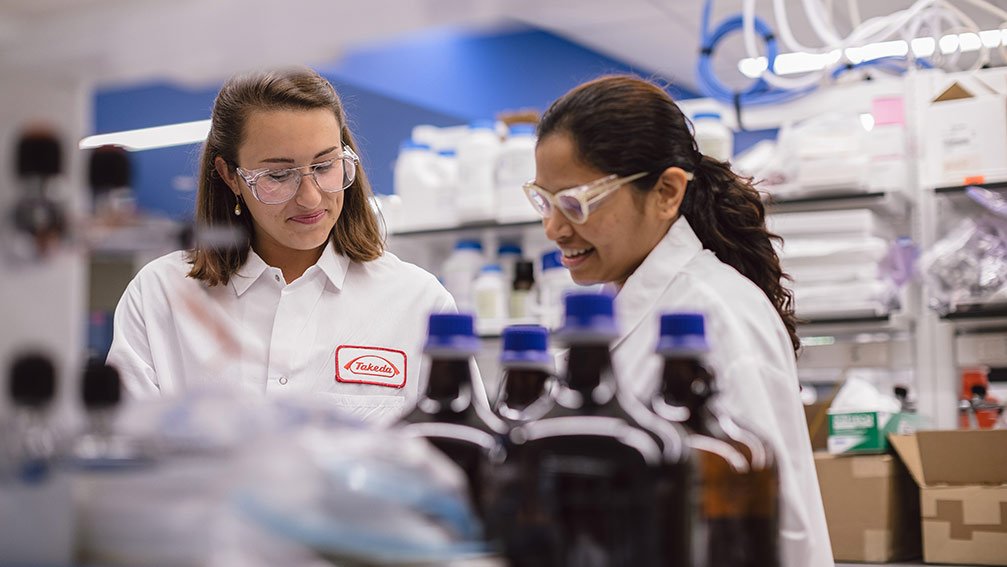 The use of panitumumab (Vectibix®; Amgen/Takeda) plus mFOLFOX6 significantly improved overall survival in patients with RAS wild-type metastatic colorectal cancer (mCRC) that was classified as left-sided compared to patients who received mFOLFOX6, a standard chemotherapy regimen, plus bevacizumab (Avastin®; Genentech/Roche), a monoclonal antibody, according to findings from the PARADIGM-study, an open-label, multi-center trial in Japan funded by Takeda Pharmaceutical Company.  The topline results of the study were presented at the annual meeting of the American Society of Clinical Oncology (ASCO), held June 3-7, 2022 in Chicago, Il

Study Findings
Patients with RAS wild-type (non-mutated) metastatic colorectal left-sided tumors who received panitumumab lived for 37.9 months from the start of treatment in the trial compared to 34.3 months for those who received bevacizumab; they had an 18% lower risk of death. PFS, where tumor size was stable or shrinking, was 13.7 vs. 13.2 months, respectively, which was statistically equivalent in both groups.

The response rate, which is the percentage of patients with cancer that shrinks or disappears after treatment, and the curative resection rate, which indicates that no tumor remains in the body, were both higher with panitumumab compared to bevacizumab. For OS in right-sided tumors, there was no statistically significant difference between panitumumab and bevacizumab.

Adverse events were consistent with those previously reported.

“This trial demonstrates that if gene testing shows that a tumor is RAS wild-type, the choice of initial treatment with panitumumab plus mFOLFOX6 chemotherapy is superior to initial treatment with bevacizumab plus mFOLFOX6 chemotherapy for those people with left-sided tumors. It has long been believed that the sequence of metastatic colorectal cancer treatment does not matter as long as patients had access to the drugs at some point, which has now been disproven,” said lead author Takayuki Yoshino, Ph.D. who is the Chief for the Department of Gastrointestinal Oncology and the Deputy Director of the National Cancer Center Hospital East in Kashiwa, Japan.

In the U.S., an estimated 151,030 adults will be diagnosed with colorectal cancer in 2022. If the cancer spreads to distant parts of the body, the 5-year survival rate is 15%. About 22% of patients are diagnosed at this metastatic stage. [2]

Treatment
The cornerstone of treatment for colorectal cancer is to completely remove the primary lesion (the tumor in the colon) and metastatic lesions (tumors in other locations) by surgery. But if the tumor cannot be removed by surgery, or if the cancer recurs after surgery and the tumor cannot be removed, the disease is classified as ‘unresectable‘ colorectal cancer. This is, however, not based on whether the tumor can technically be resected but whether the cancerous tissue can be completely removed and recurrence of the cancer can be controlled for a long period. If the cancer is judged to be unresectable, systemic chemotherapy is administered to control disease progression, prolong life and control cancer-related symptoms.

Panitumumab, a human monoclonal antibody that targets the epidermal growth factor receptor (EGFR), was launched in September 2006 after approval by the U.S. Food and Drug Administration (FDA) for the treatment of RAS wild-type metastatic colorectal cancer (mCRC). The drug was approved in Japan in 2010 as a monotherapy for patients with EGFR-expressing mCRC after disease progression following treatment with chemotherapy drugs including pyrimidine fluoride, oxaliplatin, and irinotecan.

Bevacizumab is a monoclonal antibody drug that targets the VEGF receptor. Modified FOLFOX6 (mFOLFOX6), is a combination chemotherapy regimen that includes the drugs leucovorin calcium (folinic acid), fluorouracil, and oxaliplatin. 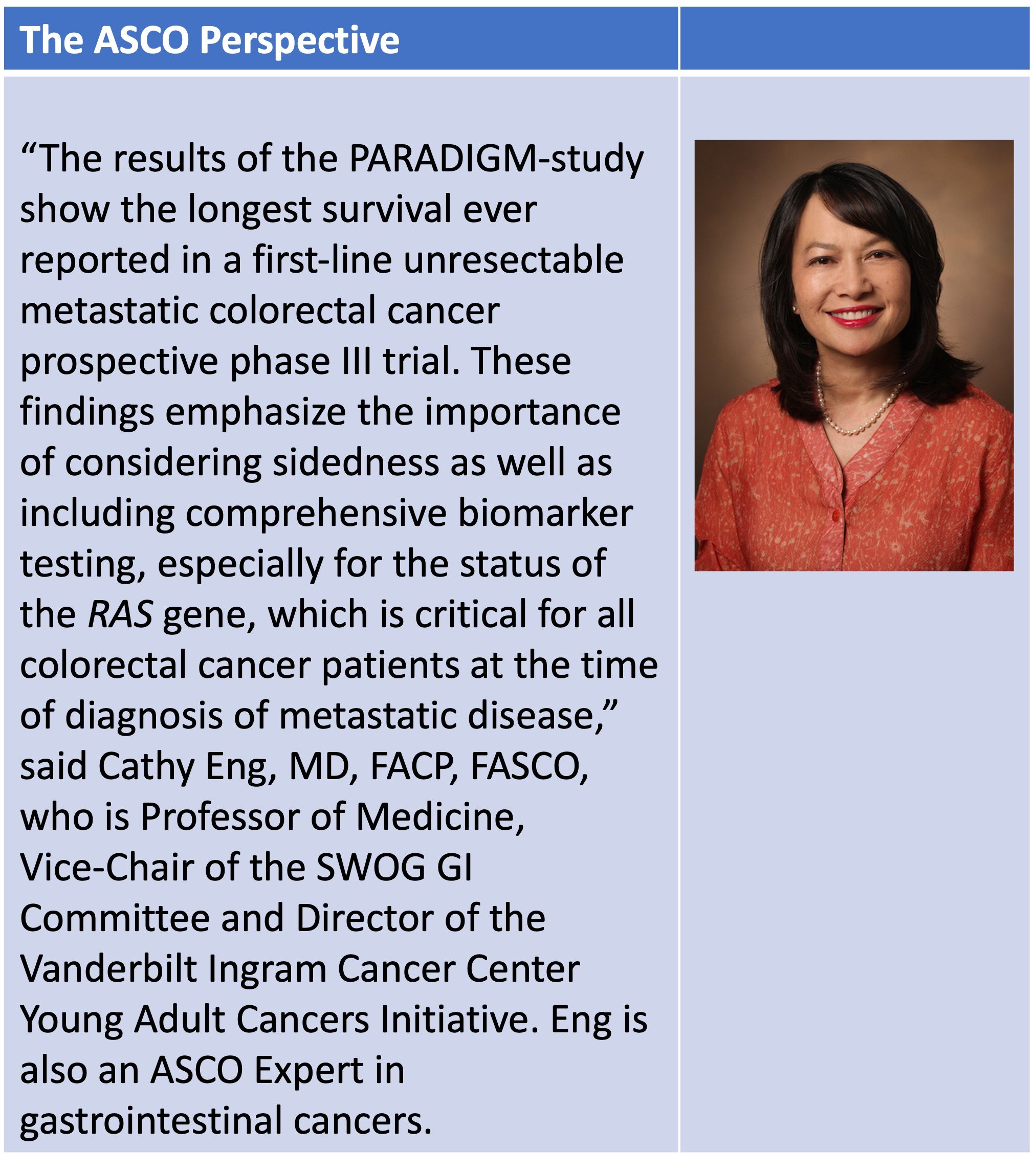 Superior benefit
No new drugs have demonstrated superior benefit over standard-of-care treatments for a decade in newly diagnosed metastatic RAS wild-type colorectal cancer. Previous studies have retrospectively analyzed data comparing anti-EGFR antibody drugs and bevacizumab. Those studies did not provide consistent results. However, PARADIGM is the largest study conducted to date to prospectively assess the impact of panitumumab in a randomized study that also assesses the impact of primary tumor location per sidedness. Results of the study suggest tumor location, along with gene testing, should be part of standard disease assessment as it can impact treatment decision-making.

Study design
Participating patients were randomly selected with chemotherapy-naive RAS WT mCRC to panitumumab + mFOLFOX6 or bevacizumab + mFOLFOX6.  In the study, overall survival (OS) was the primary endpoint hierarchically tested in patients with left-sided colon cancers, which arise in the splenic flexure (where the colon bends near the spleen), the descending part of the colon, and/or the sigmoid colon and/or the rectum*, followed by those in the full-analysis set (FAS) population. 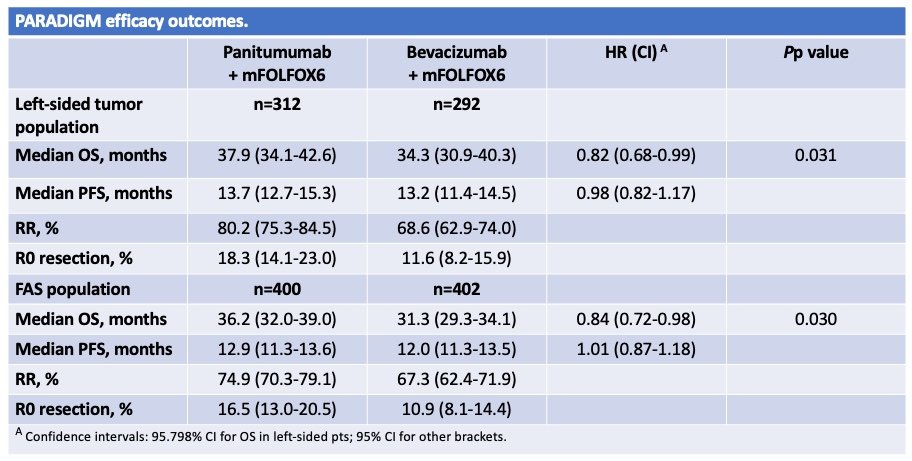 Key secondary endpoints included progression-free survival (PFS), response rate (RR), and curative resection (R0) rate. From May 2015 to June 2017, 823 patients in Japan were randomly assigned to one of two treatment arms in the PARADIGM phase 3 clinical trial. Patients were followed for a median of 61 months. A total of 400 patients received panitumumab and 402 patients received bevacizumab. Both groups received mFOLFOX6. There were 614 patients out of a total of 802 patients who had left-sided primary tumors. The primary endpoint was OS. Key secondary endpoints included PFS, response rate, and curative resection rate.

Next Steps
A large-scale biomarker analysis based on 750 DNA samples from patients will be conducted using pre- and post-treatment DNA samples. A more defined predictive biomarker as well as resistance mechanisms for both panitumumab and bevacizumab will be explored.