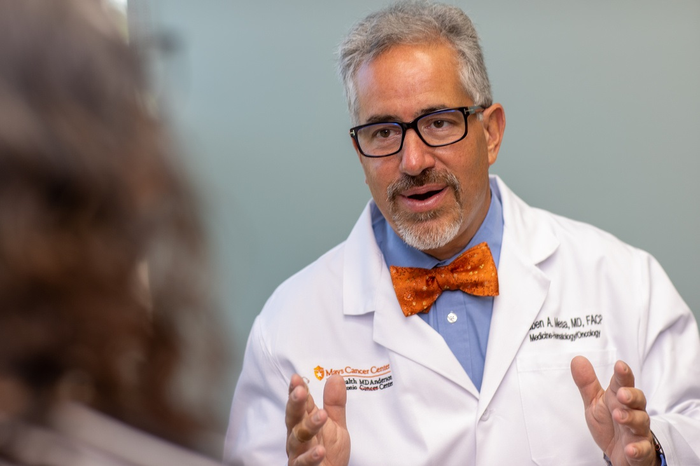 This conclusion is based on the results of the Momentum Study presented by Ruben Mesa, MD, FACP, executive director of the Mays Cancer Center, home to UT Health San Antonio MD Anderson Cancer Center, during the 2022 Annual Meeting of the American Society of Clinical Oncology (ASCO).

The Phase 3 Momentum study was designed to evaluated momelotinib against a second medication, danazol (Danocrine®; Sanofi; Danazol, Teva), a synthetic steroid derived from ethisterone, used in the treatment of symptomatic and anemic MF patients previously treated with standard-of-care JAK inhibitor therapy. The study enrolled 195 MF patients in 21 countries and was sponsored by Sierra Oncology of San Mateo, Ca.

Need
Myelofibrosis results from dysregulated JAK-STAT signaling and is characterized by constitutional symptoms, an enlarged spleen and progressive anemia.

In myelofibrosis, scar tissue forms in the bone marrow and hinders the body’s ability to produce healthy blood cells. Anemia, a lack of red blood cells to carry oxygen throughout the body, is observed in virtually all MF patients and negatively impacts survival, Dr. Mesa said.

“A third of the patients have anemia up front, and most patients will develop it over the course of their disease,” Mesa said.

“For patients with severe anemia, survival is shortened to about two years. Even with mild anemia, the median survival is 4.9 years. A drug to treat anemia in these patients has been urgently needed,” he added.

Without anemia, median survival with MF is closer to eight years, he said.

“Myelofibrosis features abnormal signaling of JAK proteins and excessive activation of another protein, ACVR1. Pioneering MF drugs developed over the last decade, such as ruxolitinib, inhibit the harmful JAK signaling, whereas momelotinib is the first drug that inhibits both JAK and ACVR1,” Mesa explained.

“It has JAK1, JAK2 and ACVR1 inhibitors in one drug and addresses chronic inflammation due to the hyperactivation of ACVR1 as a consequence of the disease,” Mesa said.

Findings
Of the enrolled participants, 130 received momelotinib and 65 danazol. Participants did not know until after 24 weeks which drug they received, and those in the danazol group were allowed to cross over to momelotinib at that time.

In the momelotinib group:

“The results were compelling,” Mesa said.

“The study enrolled participants entirely during the COVID-19 time frame, which was remarkable. Momelotinib met all primary and secondary endpoints and within the short span of six months, there was a trend toward overall survival benefit, which is also remarkable.”

“Findings support the future use of momelotinib as an effective treatment in MF patients, especially in those with anemia,” Mesa concluded.

*Note: Momelotinib is being developed by Sierra Oncology.