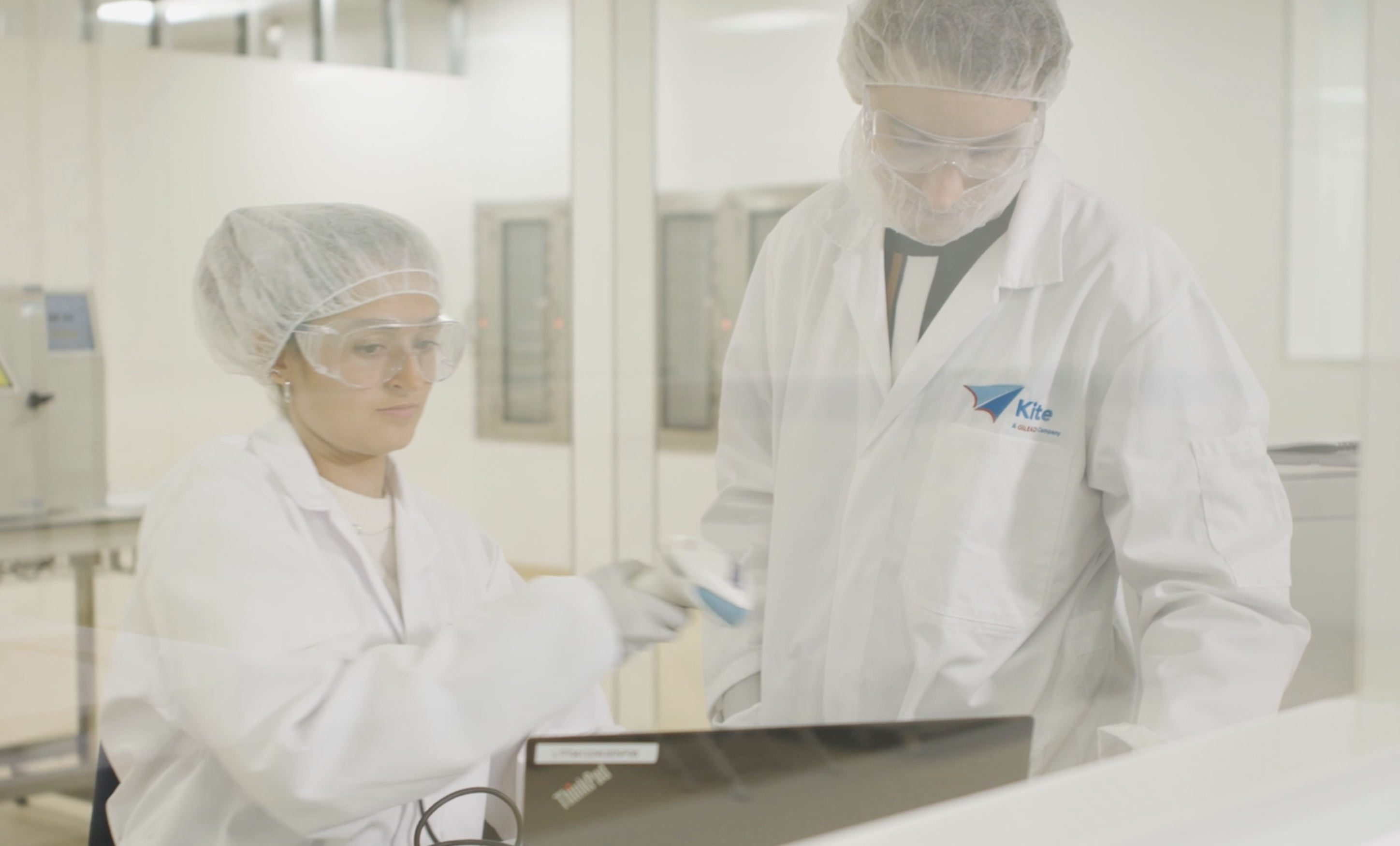 Brexucabtagene autoleucel is an autologous, CD19-directed genetically modified autologous chimeric antigen receptor T-cell (CAR T-cell) immunotherapy indicated for the treatment of adult patients with relapsed or refractory mantle cell lymphoma (MCL). This indication is approved under accelerated approval based on overall response rate and durability of response. Continued approval for this indication may be contingent upon verification and description of clinical benefit in a confirmatory trial.

With this approval, brexucabtagene autoleucel becomes the first and only approved CAR T-cell therapy for the treatment of adult patients with relapsed or refractory mantle cell lympohoma (MCL).

T-cells and CAR T-cells
T-cells, which are also called T lymphocytes, are a critical part of the adaptive immune system. Their roles include directly killing infected host cells, activating other immune cells, producing cytokines and regulating the immune response. T-cells also detect and attack cancer cells.  But if T-cells are unable to recognize tumor cells as “foreign”, T-cell activation is sub-optimal or when T-cell activity is suppressed, the immune system is unable to attack cancer cells. In that case, chimeric antigen receptor T-cell (CAR T-cell) therapy may potentially overcome these obstacles and, in turn, harness the power of the immune system to target cancer cells.

CARs are engineered proteins comprised of distinct functional components, including an antibody fragment or target binding domain that allows the CAR to recognize targets that are present on the surface of cancer cells and components that provide signals that activate the T-cell to attack cancer cells.

With the unique abillity to enhance the natural immune response against a specific tumor antigen, CAR T-cell therapies have revolutionoized the treatment of cancer and hematological malignancies. And with the approval of brexucabtagene autoleucel Kite Pharma has become the first company to with multiple approved CAR T-cell therapies.

Rare disease
Mantle cell lymphoma (MCL) is a rare form of non-Hodgkin lymphoma (NHL) that arises from cells originating in the “mantle zone” of the lymph node and predominantly affects men (3 to 1) with a media age at diagnosisi between 60 and 70 year od age and a median overall survival (OS) of five years. [1]

The most common manifestations of MCL include extensive lymphadenopathy or adenopathy (a disease in which lymph nodes are abnormal in size or consistency), and extranodal involvement is common. Furthermore the disease has shared features of both indolent and aggressive NHL and is generaly characterized by reciprocal chromosomal translocation t(11;14)(q13:q32), This translocation, in turn, leads to constitutive expression of cyclin D1, which plays a significant role in tumor cell proliferation via cell cycle dysregulation, chromosomal instability, and epigenetic regulation. [1]

The disease is highly aggressive following relapse, with many patients progressing following therapy. Furthermore, patients with relapsed or refractory MCL who have disease progression during or after the receipt of Bruton’s tyrosine kinase (BTK) inhibitor therapy (Ibrutinib; Imbruvica® | Pharmacyclics/Janssen Biotech or acalabrutinib; Calquence® | AstraZeneca) have a poor prognosis.

With an annual incidence of one case per 200,000 people, the disease is so rare that, accordig to Luhua (Michael) Wang, M.D., Professor, Department of Lymphoma and Myeloma, Division of Cancer Medicine at The University of Texas MD Anderson Cancer Center, practicing oncologists may only see one or two patients with this disease during their entire career.

But regardless of how rare the disease is, researchers are actively looking for a way to improve the management of this largely incurable disease.

“In the past decade, researchers have made significant progress in our understanding of this disease and we have seen an increase in clinical trials for patients, which we hope will continue to improve treatment strategies and the options available to people with mantle cell lymphoma,” said Meghan Gutierrez, Chief Executive Officer at the Lymphoma Research Foundation.

“Many patients have high-risk disease and are more likely to keep progressing, even after subsequent treatments. The availability of brexucabtagene autoleucel as the first-ever cell therapy for patients with relapsed/refractory MCL provides an important option with a response rate of nearly 90% and early clinical evidence suggesting durable remissions in later lines of therapy,” Wang concluded.

“Today’s news builds upon this progress and provides hope to mantle cell patients and their loved ones,” Gutierrez said.

“The approval marks the first CAR T-cell therapy approved for mantle cell lymphoma patients and represents a new frontier in the treatment of this disease,” she added.

Commitment
“Kite is committed to bringing the promise of CAR T-cell therapy to patients with hematological cancers, and as such, we are proud to launch our second cell therapy,” noted  Christi Shaw, Chief Executive Officer of Kite.

“I extend my thanks to the patient study participants, caregivers, clinical researchers, regulators and dedicated colleagues at Kite who helped make this approval possible, and we look forward to partnering with the lymphoma community to deliver this potentially transformative therapy to patients with relapsed or refractory MCL,” Shaw added.

ZUMA-2 study
The approval of this one-time therapy follows a priority review and FDA Breakthrough Therapy Designation and is based on results of the multi-center, 20-site, Phase II ZUMA-2 pivotal trial, a single-arm, open-label study. The trial enrolled 74 adult patients with relapsed or refractory MCL who had previously received anthracycline– or bendamustine-containing chemotherapy, an anti-CD20 antibody therapy and a Bruton tyrosine kinase inhibitor.

As part of the trial, patients underwent leukapheresis and optional bridging therapy, followed by conditioning chemotherapy and a single infusion of KTE-X19 at a dose of 2×106 CAR T-cells per kilogram of body weight.[2]

The primary endpoint was objective response rate (ORR) per the Lugano Classification (2014), defined as the combined rate of CR and partial responses as assessed by an Independent Radiologic Review Committee (IRRC).

Manufacturing
Brexucabtagene autoleucel, which will be manufactured in Kite’s commercial manufacturing facility in El Segundo, California, uses the XLP™ manufacturing process that includes T-cell enrichment, a necessary step in certain B-cell malignancies in which circulating lymphoblasts are a common feature.

The newly aproved drug is a hyper-personalized CAR T-cell therapy which usese a patients’ own T-cells.  The process begings with the extracted and collection of a patient’s white blood cells through a process called leukapheresis. After leukapheresis, the collected cells are sent to a central manufacturing facility were they are genetically reengineered. This process includes isolation and activatatin after which the collected cells are transduced with a retroviral vector to introduce the chimeric antigen receptor construct into the patient’s own T-cells, and stimulated to proliferate. The CAR T-cells increase innumber. After sufficient number of cells is available for treatment, the CAR T-cells are frozen, sent back to the CAR T-cell enabled clinical center. Here the reengineered T-cells are infused back into the patient.

In the ZUMA-2 trial, Kite demonstrated a 96% manufacturing success rate and a median manufacturing turnaround time of 15 days from leukapheresis to product delivery. Manufacturing speed is especially critical for patients with advanced disease, who are very ill and at risk for quick progression.

Boxed warning
Brexucabtagene autoleucel has a Boxed Warning in its product label regarding the risks of CRS and neurologic toxicities. A Risk Evaluation and Mitigation Strategy (REMS), a drug safety program required for specific therapeutic agents with serious safety concerns to help ensure the benefits of the medication outweigh its risks, has been approved by the FDA for brexucabtagene autoleucel and has been combined with the REMS for axicabtagene ciloleucel (Yescarta®; Kite, a Gilead Company), another CAR T-cell therapy.

The REMS program is designed to inform and educate healthcare professionals about the risks associated with brexucabtagene autoleucel therapy, and training and certification on the REMS program will be an integral part of the final authorization for centers offering the agent.

Ongoing studies and regulatory pathway
In addition to MCL, brexucabtagene autoleucel is also currently in Phase I/II trials in acute lymphoblastic leukemia (ALL) and chronic lymphocytic leukemia (CLL). The drug is currently under review in the European Union and has been granted Priority Medicines (PRIME) designation by the European Medicines Agency for relapsed or refractory MCL.

Featured image: A step in the manufacturing of CAR T-cells at a Kite Pharma facility. Photo courtesy: © 2020 Kite Pharma. Used with permission.