Samsung Bioepis, a joint venture of Samsung Biologics and Biogen, and Merck & Co (known as MSD outside the United States and Canada) have confirmed that their version of trastuzumab (trastuzumab-dttb; Ontruzant®), a biosimilar of the reference biologic medicine branded as Herceptin® (Genentech/Roche)[1] is now available in the United States.

The reference drug Herceptin®, a recombinant DNA-derived humanized monoclonal antibody for use in the treatment of Human Epidermal growth factor Receptor 2-positive (HER2+) breast cancer and HER2+ gastric cancer, was developed by Genentech/Roche and is a standard of care therapy, representing a multibillion-dollar drug product.  The reference drug was  originally approved in 1998. 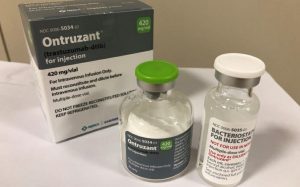 The launch follows the approval from the United Stated Food and Drug Administration (FDA) in January 2019 for the 150 mg vial and in March 2020 for the 420 mg vial, based on Samsung Bioepis’ comprehensive data package, including analytical, nonclinical and clinical pharmacokinetics, safety and effectiveness data demonstrating that the biosimilar trastuzumab-dttb is highly similar to its reference product trastuzumab, and there are no clinically meaningful differences in terms of the safety, purity, and potency of the product.[2][3][4][5][6][7]

“The launch of [this biosimilar product] to deliver our first oncology biosimilar in the United States marks an important milestone for Samsung Bioepis, and more importantly, for the patients who are in need of this proven treatment,” said Christopher Ko, President, and Chief Executive Officer, Samsung Bioepis.

“While we understand that this is an unprecedented time for our hospitals and healthcare workers, we at Samsung Bioepis remain steadfastly committed to the patients we serve through our efforts to ensure the continued supply of our medicines through collaboration with our manufacturing and commercial partners,” he continued.

The drug will be introduced in the United States at a list price (wholesaler acquisition cost) of approximately U.S. $ 1,325.00 for the 150 mg single-dose vial and U.S. $ 3,709.00 for the 420 mg multiple-dose vial (prices are rounded), representing a 15% discount to the current list price of the reference drug. Wholesaler acquisition costs do not include discounts to payors, providers, distributors, and other purchasing organizations.

Agreement
Under the terms of the agreement between the partners, Samsung Bioepis will be responsible for preclinical and clinical development, process development and manufacturing, clinical trials and regulatory registration. Merck is responsible for commercialization activities for products approved in its partnered territories, including the US.

Samsung Bioepis’ trastuzumab biosimilar will be marketed and distributed in the United States by Merck. Earlier this year Merck announced that it intends to spin-off its women’s Health, trusted Legacy Brands and Biosimilars businesses, including Samsung Bioepis’ biosimilar, into a new, independent, publicly-traded company.

Merck confirmed that the company continues to fully support the commercialization of trastuzumab-dttb until the spinoff, which is intended to take place in the first half of 2021.

Under terms of the agreement, Samsung Bioepis is responsible for preclinical and clinical development, process development and manufacturing, clinical trials and regulatory registration while Merck is responsible for commercialization activities for products approved in its partnered territories, including the US.

Increasingly crowded marketplace
Biosimilar competition has been introduced to significantly reduce the financial burden of biologic treatments on the healthcare system in the United States.

Following the adoption of the Biologics Price Competition and Innovation Act (BPCIA) in 2009, which was designed to stimulate competition between pharmaceutical companies to develop less expensive biosimilar medicines, the FDA has created a shorter, less expensive approval pathway for equivalent treatments. As a result, a large number of highly similar biologic agents are being developed. These biosimilars are produced using the same amino acid sequence as the reference biologic, have the same mechanism of action, and are proven to have no clinically meaningful differences from its reference biologic in safety, potency, and purity. [8][9][10][11][12]

In addition to Samsung Bioepis’ trastuzumab biosimilar, there are no multiple FDA-approved biosimilar versions of trastuzumab on the market while others are being developed or are pending regular approval: