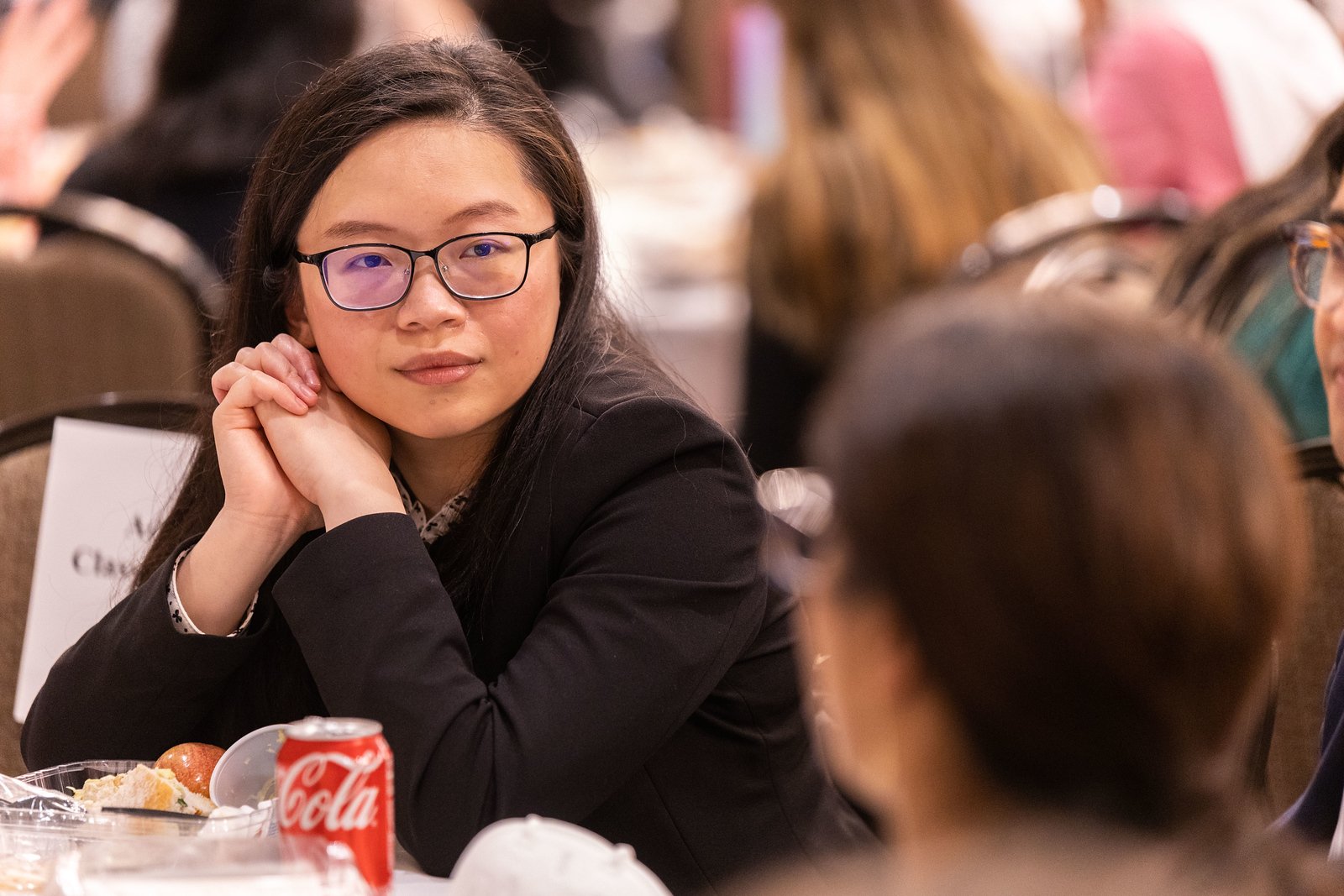 Despite the approval of a number of new targeted therapies for the treatment of AML, median overall survival still remains poor, ranging from 12 to 18 months in most patients. As a result there is a major unmet medical need, requiring ongoing research in finding new and better treatment options.

The positive data for PRGN-3006 UltraCAR-T® were presented by David A. Sallman, MD, Assistant Member in the Department of Malignant Hematology at the H. Lee Moffitt Cancer Center & Research Institute (Moffitt) and a lead investigator for the PRGN-3006 clinical trial.[1]

Using International Prognostic Scoring System (IPSS-R), median survival for MDS patients can vary from less than one year for the “very high” IPSS-R risk group to more than eight years for the “very low” IPSS-R group. [5]

CD33 is over-expressed on AML blasts with lesser expression on normal hematopoietic stem cells. PRGN-3006 UltraCAR-T drug product is manufactured via an overnight process at medical centers using the Company’s proprietary non-viral and UltraPorator® systems and released for infusion in patients the next day.

The decentralized, overnight UltraCAR-T manufacturing process, which does not use viral vectors or ex vivo activation and expansion of T cells, has the potential to address major limitations of current T cell therapies.

PRGN-3006 UltraCAR-T has been granted Orphan Drug Designation and Fast Track Designation in patients with AML by the US Food and Drug Administration (US FDA).

Study design
The Phase 1/1b clinical study is designed to enroll in two phases, an initial dose escalation phase followed by a dose expansion phase, to evaluate safety and determine the recommended Phase 2 dose of PRGN-3006 delivered via intravenous (IV) infusion without lymphodepletion (Cohort 1) or with lymphodepletion (Cohort 2). The study is also evaluating in vivo persistence and anti-tumor activity of PRGN-3006.

Today’s ASH presentation includes the complete data set for the Phase 1 dose escalation phase of the study. The study enrolled a total of 26 patients (N=10 non-lymphodepletion; N=16 with lymphodepletion) and included 21 patients with r/r AML, 2 patient with chronic myelomonocytic leukemia (CMML), and 3 patients with MDS. The median age was 60.5 years (range: 32-77). Patients were heavily pre-treated with a median of 3.5 prior regimens (range: 1-9) and 58% of patients (N=15) had prior allogeneic hematopoietic stem cell transplantation (allo-HSCT). Patients treated in the non-lymphodepletion cohort and lymphodepletion cohort received a single administration of 1.8 to 50 x 106 and 4.4 to 83 x 106 UltraCAR-T cells via IV infusion, respectively.

“The dose escalation data for PRGN-3006 showed robust dose-dependent expansion and persistence of PRGN-3006 in peripheral blood and bone marrow following a single infusion with no DLTs reported to date leading to an ORR of 27% in heavily pre-treated patients in the lymphodepletion cohort, which is significant for the AML patient population with limited treatment options,” explained David A. Sallman, MD, of Moffitt and lead investigator for the PRGN-3006 clinical study.

“One patient who received PRGN-3006 following allo-HSCT has responded to treatment for more than 18 months and suggests the potential for PRGN-3006 as a bridge to allo-HSCT, a very important potential treatment pathway for these patients,” Sallman added.

The majority of treatment emergent adverse events (TEAEs) were either Grade 1 or 2 with only one transient Grade 3 CRS reported (Dose Level 1), which resolved in less than 24 hours with tocilizumab and dexamethasone. Other cases of CRS were Grade 1 or 2 and required either no intervention or resolved following standard CRS management. One Grade 1 immune effector cell-associated neurotoxicity syndrome (ICANS) was reported. No patients experienced a significant increase in serum IL-15, demonstrating that mbIL15 remains tethered to the UltraCAR-T cells as designed and is not released.

Cohort 2: Lymphodepletion
In the lymphodepletion cohort, PRGN-3006 was also well-tolerated with no DLTs reported to date (Table 1). Overall, there was a low incidence of adverse events following PRGN-3006 infusion with lymphodepletion and the most common adverse events were decreases in lymphocytes, white blood cells and neutrophil, anemia, febrile neutropenia and CRS. The majority of TEAEs were either Grade 1 or 2.

Only one Grade 3 CRS was reported (Dose Level 3), which was subsequently downgraded to Grade 1 by the investigator. Other cases of CRS were Grade 1 or 2 and required either no intervention or resolved following standard CRS management. One Grade 2 ICANS was reported. No patients experienced a significant increase in serum IL-15, demonstrating that mbIL15 remains tethered to the UltraCAR-T cells as designed and is not released. 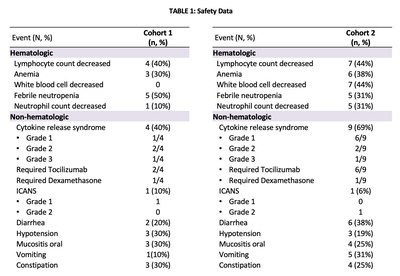 Change in Bone Marrow Blasts
Of the 15 evaluable patients in the lymphodepletion cohort, 60% (9 out of 15) heavily pre-treated patients had a reduction in bone marrow blasts following a single PRGN-3006 infusion, with 4 patients experiencing a substantial decrease to ≤5% (Figure 2). 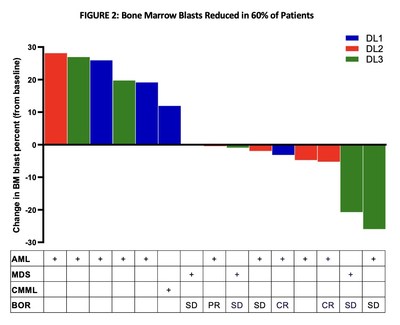 Cohort 2: Lymphodepletion
An objective response rate (ORR) of 27% (3 out of 11) was reported for heavily pre-treated r/r AML patients with poor prognosis (median prior treatments: 4; range: 1-9) in the lymphodepletion cohort. Responders received a single PRGN-3006 dose ranging between 4.4 to 28 x 106 cells following lymphodepletion. A disease control rate (DCR) of 45% (5 out of 11) at day 28 for r/r AML patients and 100% of MDS patients, respectively, as shown in TABLE 2. One patient with CRi was bridged to allo-HSCT at three months post treatment and remains in a measurable residual disease-negative CR 18 months post-transplant, as shown in TABLE 3.

There was an increase in cytotoxicity, costimulatory signaling, and lymphoid compartment and decreased apoptosis pathway scores in the lymphodepletion cohortA on Days 14 and 28 post PRGN-3006 treatment compared to baseline. Furthermore, preliminary analysis shows a potential correlation between a biomarker and objective responses at different dose levels in AML patients, which will be further investigated in the ongoing Phase 1b expansion trial.

“We are pleased with the performance of PRGN-3006 UltraCAR-T in demonstrating meaningful clinical responses for heavily pre-treated r/r AML patients who have limited therapeutic options. These data further validate our innovative approach of overnight, decentralized manufacturing of autologous CAR-T cells and demonstrate the capability of the UltraCAR-T platform to directly expand in vivo and persist in the body leading to complete and partial responses in cancer patients with highly advanced disease,” noted Helen Sabzevari, PhD, President and CEO of Precigen.

“We believe the UltraCAR-T platform is distinctly differentiated from other cell therapy technologies with the potential to bring cutting-edge treatments to all cancer patients rapidly and economically,” Sabzevari concluded.