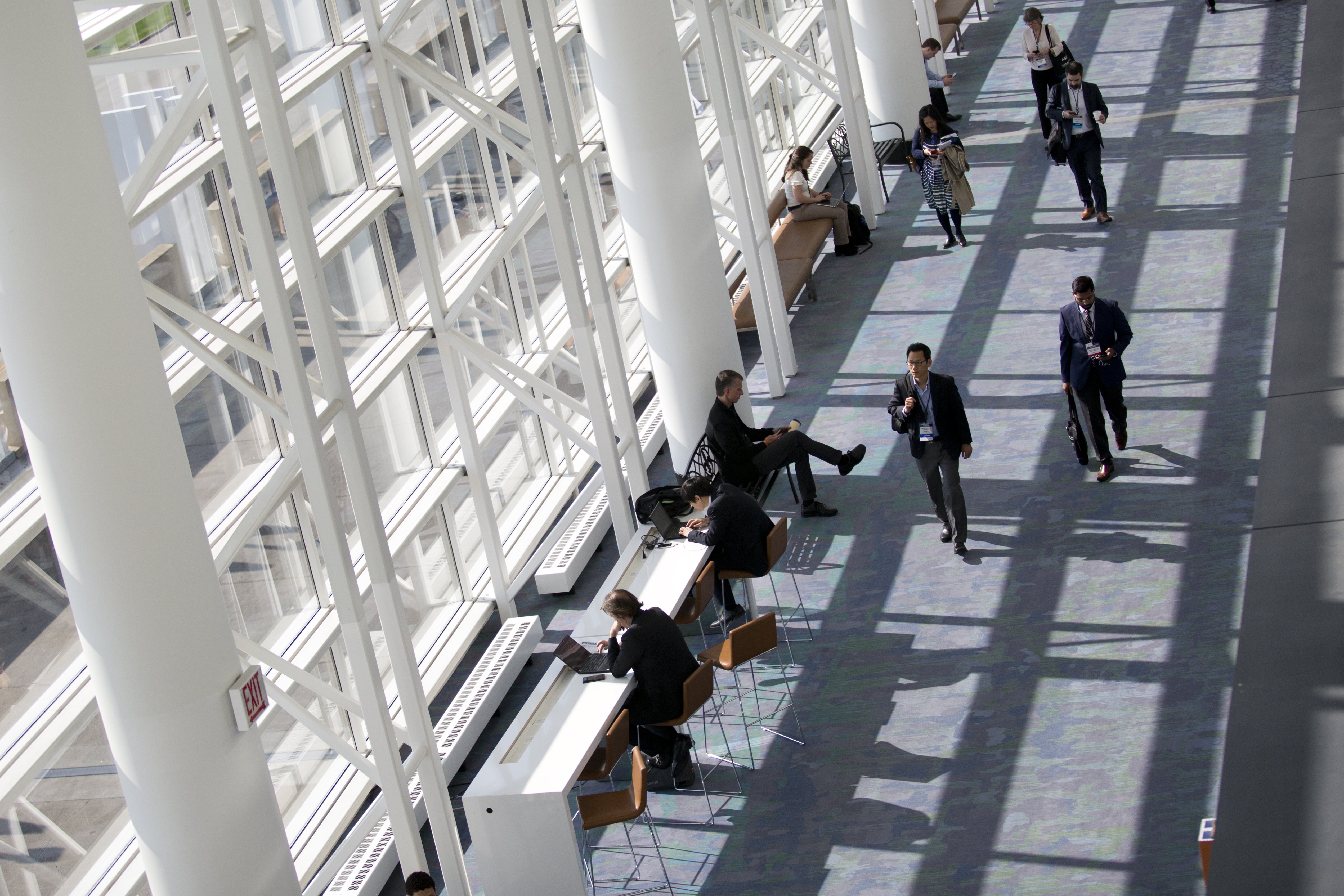 Use of high-dose ifosfamide (Ifex®; Bristol-Myers Squibb) was found to be superior for treating recurrent and primary refractory Ewing sarcoma (a rare type of cancer that mainly affects teenagers, young adults and children and ususally develops in the long bones, such as the femur, tibia, and humerus), compared to three other standard-of-care treatments that are used for the disease. This is the conclusion based on results of the rEECur study presented at the annual meeting of the American Society of Clinical Oncology (ASCO) held from June 3-7, 2022 in Chicago, Il.

Study Findings
The rEECur study, funded in part by the Cancer Research UK and European Commission and others, is the first trial to provide comparative toxicity and survival data for the four most commonly used chemotherapy regimens in recurrent and primary refractory Ewing sarcoma, showed that high-dose ifosfamide prolonged median event-free survival by 5.7 months compared to 3.7 months for topotecan plus cyclophosphamide.

Median OS was 16.8 months for ifosfamide vs. 10.4 months for topotecan plus cyclophosphamide. A greater survival difference was observed for patients under age 14 than those 14 and older.

“The rEECur study has, for the first time, accrued randomized data for four widely used chemotherapy regimens and is now accruing data for a fifth regimen. Before the rEECur study, the basis for choosing drugs for patients with relapsed or refractory Ewing sarcoma was weak and lacking randomized trials to inform clinicians or patients about which treatments were most effective and/or most toxic,” said lead author Martin McCabe, MD, PhD, who is a clinical senior lecturer in pediatric and adolescent oncology at the University of Manchester, England. 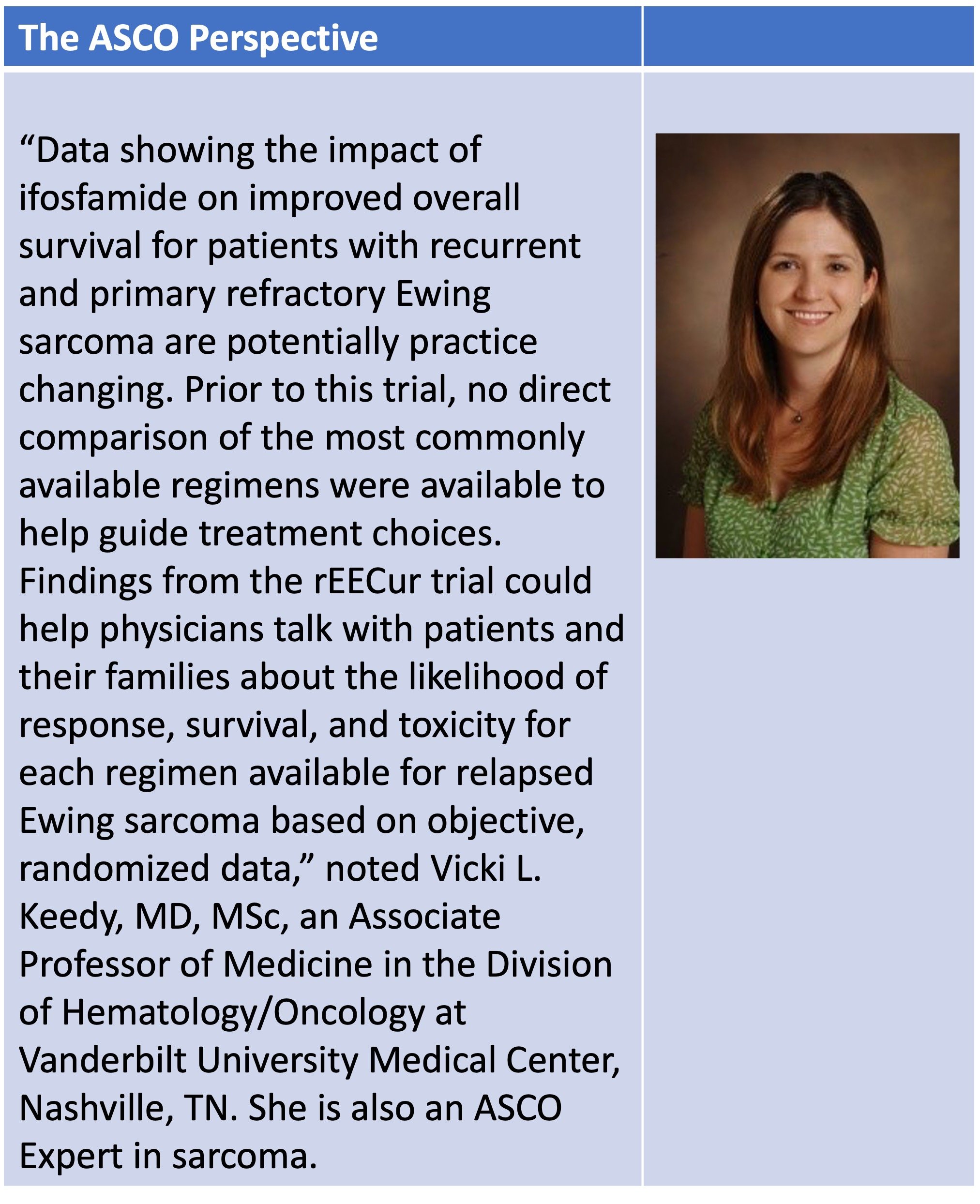 Ifosfamide, first approved for use in the United States (U.S.) in 1987, works by adding an alkyl group to DNA, leading to an eventual breaking of DNA strands and affecting the ability of cancer cells to multiply.

The current five-year survival rate of recurrent and primary refractory Ewing sarcoma is about 15%. Ewing tumors are uncommon as only about 200 children and teens are diagnosed with the disease in the U.S. each year.[2]

About the Study
The phase II/III rEECur trial randomly assigned patients in Europe, ages 4 to 50 (median age of 19) with recurrent and primary refractory Ewing sarcoma to either topotecan plus cyclophosphamide, irinotecan plus temolozomide, gemcitabine plus docetaxel, or high-dose ifosfamide. The primary outcome was event-free survival in the phase III comparison. Secondary outcomes included reviews of responses by imaging, OS, toxicity, and quality of life. At the first and second interim assessments, patients receiving irinotecan plus temolozomide and gemcitabine plus docetaxel had worse objective responses and event-free survival than the other treatments, thereby halting recruitment to both groups. The final assessment was a phase III evaluation of topotecan plus cyclophosphamide vs. ifosfamide. Median follow-up was 40 months.

The regimens were chosen because they were the most widely used regimens for recurrent/refractory Ewing sarcoma in Europe at the time the trial was established. These choices were important as some regimens, notably irinotecan plus temolozomide and topotecan plus cyclophosphamide, were being used as the chemotherapy backbone in trials with molecularly targeted agents.

Importance
The rEECur study is the first randomized trial to compare different chemotherapy regimens in recurrent and primary refractory Ewing sarcoma. Previous studies were single arm trials or case series. Before this trial, it was not possible to say which regimen was most effective or most toxic.

Next Steps
The trial is continuing to recruit patients to the ifosfamide arm. It has also added a fifth chemotherapy arm that includes carboplatin and an etoposide, an agent which can damage DNA. The investigators plan to introduce a new arm involving a molecularly targeted therapeutic later this year.