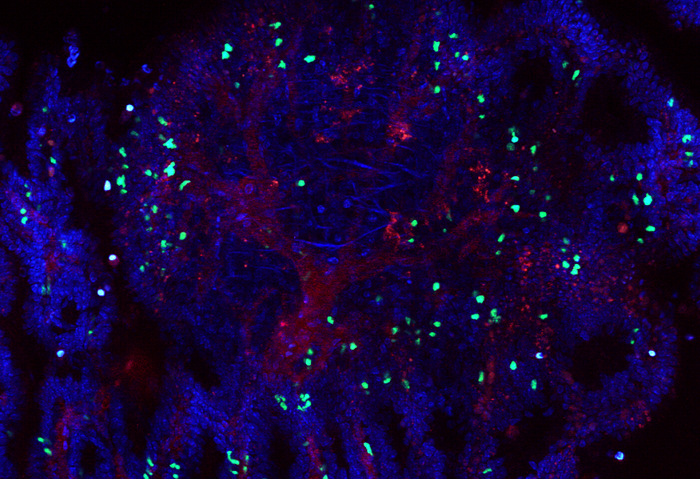 Colorectal tumors are swarming with white blood cells, but whether these cells help or hinder the cancer is hotly debated. While some studies have shown that white blood cells heroically restrict tumor growth and combat colorectal cancer, equally compelling evidence casts the white blood cells as malignant co-conspirators—bolstering the tumor and helping it spread.

In a new study, researchers clarifies the role of these intestinal white blood cells, known as gamma-delta (𝛄𝛅) T-cells in colorectal cancer (CRC).

These gamma-delta (𝛄𝛅) T-cells are a subtype of T lymphocytes and  perform epithelial surveillance and orchestrate pro- and anti-inflammatory responses. The researchers found that these T-cells have a double-edged function: They rein in early-stage tumors but, as the disease progresses, undergo biochemical changes and switch sides, strengthening the tumor.

“Gamma-delta (𝛄𝛅) T-cells that live in the gut act to prevent tumor formation,” explained  Bernardo Sgarbi Reis, Ph.D., a research associate in the laboratory of Daniel Mucida at The Rockefeller University.

Altered T cell receptors
The intestinal lining may be the body’s most vulnerable port of entry. Composed of but a single layer of epithelial cells, this busy digestive region must absorb useful substances like nutrients, and reject harmful ones like food-borne pathogens, within a limited working space.

Gamma-delta (𝛄𝛅) T-cells mind the gaps, perpetually scanning the epithelium to maintain the integrity of the intestinal lining and prevent pathogens from invading the rest of the body.

Conflicting claims
Reis set out to investigate conflicting claims over whether these cells help or hinder the growth of intestinal tumors. But as is often the case in biology, there was no simple answer.

“We had data showing 𝛄𝛅 T-cells were protective, but the literature suggested that they also promote tumor growth. We wanted to understand what these 𝛄𝛅 T-cells were really up to,” Reis said.

Working in a mouse model of colorectal cancer, Reis and colleagues derived 𝛄𝛅 T-cells from the intestines of animals with early-stage tumors and from the tumors of mice with advanced cancer. In comparing these two sources of supposedly identical cells, the researchers were surprised to find vast molecular differences between them.

For example, the two categories of 𝛄𝛅 T-cells boasted different T-cell receptors. Moreover, 𝛄𝛅 T-cells that had entered the tumor produced Interleukin (IL-) 17, a cytokine that normally promotes inflammation in response to infection. In the tumor microenvironment, however, IL-17 was promoting disease—spurring tumor growth and recruiting other cells to help hide the tumor from the rest of the immune system.

To confirm their findings, the team then used CRISPR gene editing technology to selectively remove T cell receptors from the white blood cells, changing the cells from anti-tumor to pro-tumor, or vice versa. In this way, they managed to increase the number and decrease the size of tumors in mouse models. “When we depleted the original 𝛄𝛅 T cells, the mice became sicker,” Reis explained.

“And when we depleted the tumor invading 𝛄𝛅 T-cells, the tumors shrank,” he noted.

Hope for human cancers
Reis and colleagues witnessed similar activity in 𝛄𝛅 T-cells derived from human colorectal tumors and their environs. Cells inside the tumor resembled the renegade, late-stage 𝛄𝛅 T-cells seen in mice, while cells hovering around the outside of the tumor looked more like the original Res. “It almost looked like a fight between these two populations,” Reis says. “Regular cells were trying to contain the tumor while cells inside were promoting tumor growth.”

In the short term, the Mucida lab will focus on shoring up our understanding what promotes 𝛄𝛅 T-cells’ shift from the intestine’s stark ally into its source of ruin. Future studies will delve deeper, examining whether it might be possible to modulate normal 𝛄𝛅 T-cells to curb the tumor and prevent their cancer-promoting alter egos from dominating the arena. Reis is also interested in exploring ways to manipulate the system by which altered 𝛄𝛅 T-cells enter the tumor.

“Perhaps we might one day fashion 𝛄𝛅 T cells into Trojan horses that can act as anti-cancer cells right inside the tumor microenvironment,” he concluded.

Featured image: A mouse colon, with red blood vessels and blue epithelial cells. Gamma-delta (𝛄𝛅) T-cells (green) surrounding the colorectal tumor in the center of the image. Photo courtesy: © 2022 Laboratory of Mucosal Immunology at The Rockefeller University. Used with permission.