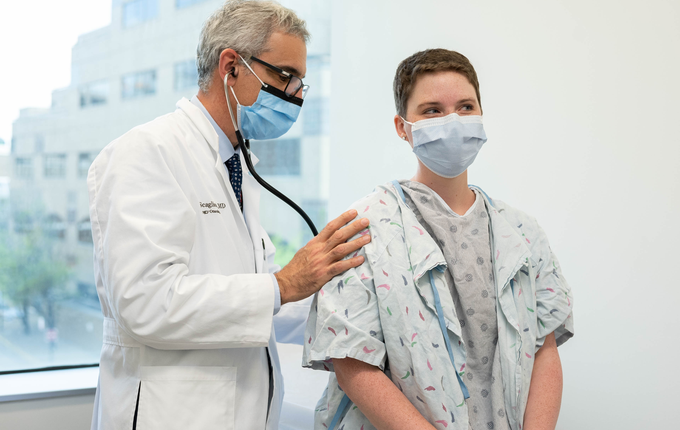 Lung cancer is the deadliest form of cancer and the second most common cancer for Americans, making the need for improved treatments especially important.

Researchers at the University of Cincinnati are studying how a specific gene and fatty acids, called lipids, help fortify lung cancer cells and if targeting the gene and lipids can lead to better outcomes for patients.

Pier Paolo Scaglioni, MD, associate director for translational research at the University of Cincinnati Cancer Center, professor and division chief of hematology oncology in the Department of Internal Medicine in UC’s College of Medicine and a UC Health physician, recently received more than $1.5 million of National Cancer Institute grant funding to continue the lung cancer research.

The KRAS gene
Scaglioni explained there are two main types of genes that affect cell growth. Oncogenes work as the gas pedal that helps accelerate cell growth and division, while tumor suppressors act as the brakes that put a halt to cancer cell growth.

The current research focuses on an oncogene called Kirsten rat sarcoma (KRAS), one  of the most commonly mutated RAS isoform accounting for 85% of RAS mutations observed in human cancers. KRAS is also activated in about 35% of lung adenocarcinomas (LUADs).

KRAS was one of the first oncogenes to be discovered, in 1983, but Scaglioni said effective treatments that shut the gene down in human patients were introduced in the last few years.

While targeted therapies and immune checkpoint inhibitors (CPIs) have in recent years drastically changed the treatment landscape of advanced non-small-cell lung cancer  (NSCLC), historic attempts to target KRAS, both direct and indirect, have not been succesful, and today there are no approved KRAS-specific targeted therapies for patients with this molecular subset of NSCLC.[1]

Although current KRAS-targeted treatments have been shown to shrink tumors, many lung cancers develop resistance to treatment and become ineffective.

Scaglioni explained that research in animal models has shown a mutated KRAS gene alone is sufficient to cause lung cancer to grow, while shutting down KRAS in a clean laboratory tumor model will cause tumors to shrink completely.

Lipids’ role in cancer cells
Scaglioni also explained that there are a number of activities that KRAS encourages in the cancer cells, including instructing the cells to make its own lipids and absorb other lipids in the bloodstream.

Usually, the liver and fat cells absorb lipids that enter the blood after someone eats. In a previous publication, Scaglioni’s team found that instead lung cancer with KRAS takes and burns the lipids as energy so that the cancer can grow.

“We adapted this technique to the study of lipids and specifically in a miniaturized, scaled-down version so that we can actually study tumors which are like the head of a pin,” Scaglioni noted.

“As far as I know there are three places worldwide where we can do this, and UC is one of them.”

In addition to being used as fuel to help cancer cells grow, the team discovered that the lipids also help fortify the cell membrane and prevent damage that could lead to cancer cell death.

“Then you can start manipulating the genes and ask yourself what happens to the cancer.”

In the lab, the team used a novel drug to block the protein responsible for fatty acid synthesis. As expected, when the cells couldn’t make lipids, cancer cells couldn’t grow and began to die.

With the lessons learned from the research, Scaglioni and his team oversaw a Phase 1 multisite clinical trial testing the effectiveness of the drug to treat patients with KRAS-mutated lung cancer. The trial results were sufficient to proceed to a Phase 2 trial currently being operated at University of Texas Southwestern Medical School, with the trial expected to open at UC soon.

“In the Phase 1 trial, we had some patients whose tumors either shrunk or stopped growing, and so it was encouraging,” he said.

Scaglioni and his team will use the new grant funding to further his research into how lipids and the KRAS gene interact to promote cancer growth, continuing to use novel animal models and mass spectrometry. The hope is to learn more about the mechanisms behind these processes that could potentially be targeted with new drugs.

This line of research is a good example of what it takes to develop effective new targeted treatments for cancer, Scaglioni said, from the broad understanding that the KRAS oncogene helps tumors grow to discovering the detailed processes and roles that lipids play.

“When you understand specific mechanisms and try to develop a drug that affects those processes, you can actually come up with a targeted way of treating cancer rather than giving a drug that affects all these processes,” he said. “Because if we give a drug that stops the cells from growing, like with chemotherapy, the cancer may shrink, but also the [good] cells that proliferate in our body stop growing. Finding the specific mechanism that the cancer cells use for their advantage has the promise of developing a more specific path.”