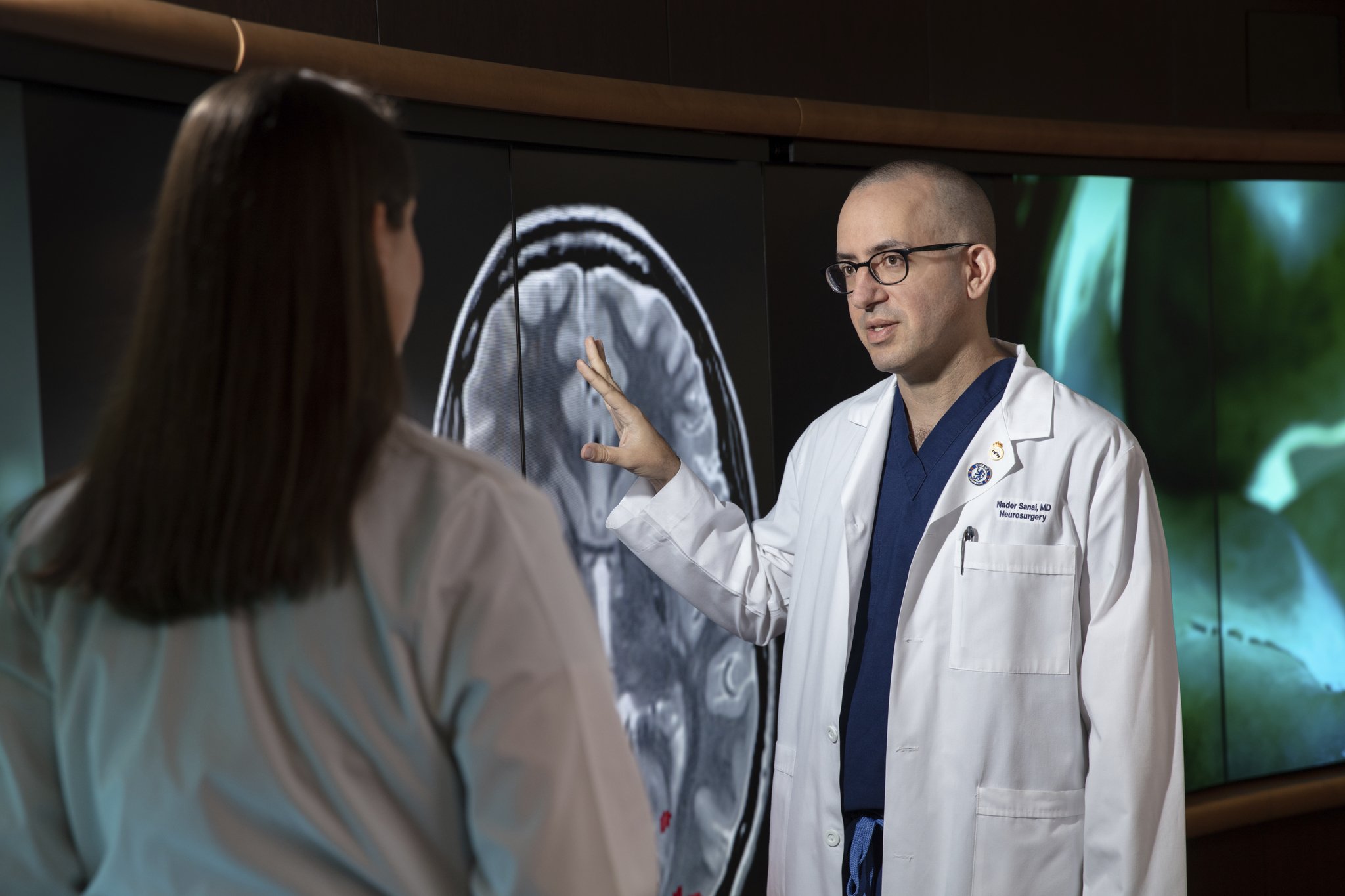 A research team at the Ivy Brain Tumor Center at Barrow Neurological Institute, the largest early-phase drug development program for brain cancer, will evaluate evaluate AZD1390 in a Phase 0/1b clinical trial with patients diagnosed with recurrent grade IV gliomas. The study, funded by the Ben and Catherine Ivy Foundation and the individual donors of the Barrow Neurological Foundation, is expected will accrue up to 21 participants with a recurrent glioma who require re-radiation.

The goal of this open-label, single-center Phase 0/1b study composed of a Phase 0 and an expansion Phase 1b, is to confirm blood-brain barrier penetration of AZD1390 and explore whether it increases the efficacy of radiation therapy. Patients with tumors demonstrating a positive pharmacokinetics (PK) response in the Phase 0 portion of study will graduate to the expansion Phase 1b, which combines therapeutic dosing of AZD1390 with standard of care fractionated radiotherapy.

“[Our] study of AZD1390 builds on our investigation of agents that enhance the effect of radiation treatment. Here we will implement a proof-of-mechanism (POM) pharmacodynamics assay, which will assess whether the drug levels achieved in patients result in desired target modulation,” noted Nader Sanai, MD, director of the Ivy Brain Tumor Center and director of neurosurgical oncology at Barrow Neurological Institute.

“In theory inhibition of DNA damage response pathways would block the ability of cancer cells to repair DNA damage after radiation treatment, so we hope to see a more promising biological outcome in patients,” Sanai added.

The Ivy Center’s Phase 0 clinical trial will administer the maximum safe dose-level of the drug based on data from the active Phase 1 multi-center study of AZD1390, which is currently assessing the safety, tolerability and systemic pharmacokinetics of ascending doses of the drug in combination with radiation therapy for patients with brain malignancies.

AZD1390
AZD1390 is a highly potent, brain penetrant ataxia mutant (ATM) kinase inhibitor that blocks ATM-dependent signaling and repair of DNA double strand breaks (DSBs) in the genome. This investigational drug, being designed by AstraZeneca, therefore, exhibits powerful activity in combination with agents such as irradiation and chemotherapies that induce DSBs. ATM inhibition may also generate an exploitable DDR dependency against tumour cells with other DDR pathway defects.

“The drug targets ATM kinase, an essential factor that promotes the repair of DNA strand breaks caused by radiation treatment.”

As an ATP-competitive kinase inhibitor with a cellular IC50 of 0.78 nM and is highly selective against other PIKKs including ATR, DNAPK, and mTOR, the novel agent hyper-sensitizes a wide range of cancer cells to radiation in vitro, blocks the DNA damage response (DDR) to double strand breaks in cells and results in tumor regressions and survival improvement in orthotropic brain tumor models in vivo. Preclinical research has demonstrated that AZD1390 establishes a PK-PD-efficacy relationship by linking dose-dependent plasma and brain concentrations to target engagement (pRAD50) and phenotypic tumour anti-proliferation and cell death markers and exhibits significant CNS penetration with Kpu,u values of 0.04 (mouse), 0.17 (rat), and 0.33 (cynomolgus monkey).

Safety and tolerability
In preclinical toxicology studies in rats and dogs, AZD1390 has been evaluated up to 1-month duration in and the principal target organs for toxicity were identified as the male reproductive organs, lymphoreticular system, central nervous system, skeletal muscle, lungs and pancreas. In addition, increases in heart weight were observed, and minor effects on the mammary gland and kidney.

Preclinical studies also demonstrate that AZD1390 generally has favorable physical, chemical, PK, and PD properties suitable for clinical applications that require exposures within the central nervous system (CNS). In one study. researchers confirmed that AZD1390 potently inhibits ATM kinase activity in vitro (cellular IC50 ranging from 0.5 to 3 nM depending on the assay used), modulates the DDR, and sensitizes tumor cells of glioblastoma (GBM) to radiation.

Unmet medical need
In the last two decades, only 1% of investigational drug applications submitted to the FDA were designed for malignant brain tumors, so the need for new agents to meet this unmet gap is critical.

To speed up drug development, the U.S Food and Drug Administration (FDA), in 2004, introduced a new type of clinical trial called Phase 0 studies.  This type of study was developed to accelerate the drug testing and approval process, and improve the chance of success of new drugs in the clinic.

Phase 0 trial
The Phase 0 study, which include microdosing, evaluates sub-therapeutic exposures of a novel agent in first-in-human studies known as exploratory clinical trials.  In essence, phase 0 trials are designed to demonstrate whether a drug’s pharmacokinetics and pharmacodynamics warrant continued exploration. However, this type of study will not demonstrate a therapeutic effect, nor will it replace the dose escalation, safety, and tolerance studies required in Phase I. The purpose is to, early on, eliminate drugs that don’t measure up to even the most rudimentary requirements.

Today, the Ivy Brain Tumor Center operates the largest early phase clinical trials program in the world for brain cancer and is the only center to incorporate a PK/PD ‘trigger’ trial concept where patients are advanced to a therapeutic study arm only if the drug is having an effect on the patient’s tumor. The goal is to quickly identify if the drug is active in the patient’s tumor and whether it should be fast-tracked for further development. By only focuses on novel agents that have a potential to benefit patients, this process is saving time and money.