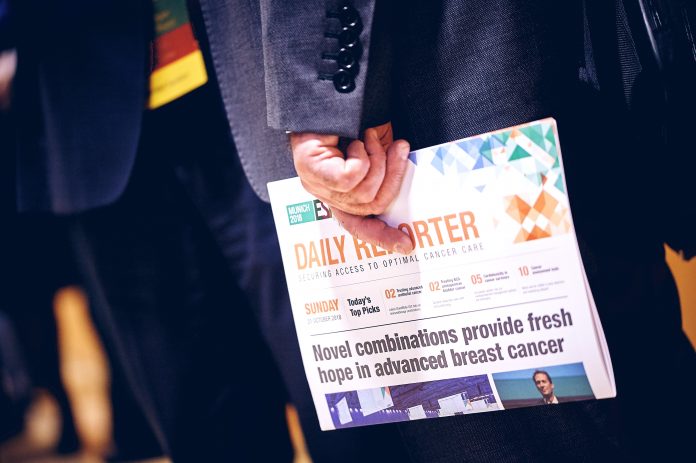 Results of a large international Phase III clinical trial published in the October 20, 2018 edition of the New England Journal of Medicine (NEJM) shows that patients with an aggressive form of advanced breast cancer can benefit from a first-line treatment of immunotherapy when used in combination with chemotherapy. [1][2]

“The study is the first large clinical trial to support the use of immunotherapy in treating triple-negative breast cancer and establishes a new standard of care in PD-L1+ patients,” senior trial investigator and study author Leisha Emens, M.D., Ph.D., co-leader of the UPMC Hillman Cancer Immunology and Immunotherapy Program, explained.

Results were presented at the annual meeting of the European Society for Medical Oncology (ESMO) in Munich, Germany, held October 19 ? 23, 2018 in Munich, Germany and simultaneously published in the New England Journal of Medicine (NEJM).[1]

A common disease
Breast cancer is the most common cancer in women, with an estimated 2 million new cases diagnosed in 2018 alone. About 10 to 20% of patients have triple-negative breast cancer (TNBC), an aggressive form of breast cancer that has a higher chance of recurrence and metastasis, and lower survival.

Triple-negative breast cancer is a form of of breast cancer where the three most common types of receptors known to fuel breast cancer growth ? estrogen (ER), progesterone (PR), and the hormone epidermal growth factor receptor 2 (HER2) ? are not present.

Because TNBC lacks the necessary receptors, standard treatments like hormone therapy and drugs that target estrogen, progesterone, and HER2 are ineffective. Chemotherapy is, in this case the only option.

“While chemotherapy is the current standard of treatment for triple-negative breast cancer, there is an urgent need for newer, more effective therapies,” said Emens.

“The results of this trial showed that adding the immunotherapy drug atezolizumab to chemotherapy was well-tolerated and resulted in a clear increase in clinical benefit for some patients with triple-negative breast cancer,” she added.

Trial design
The IMpassion130 trial was designed to evaluate whether atezolizumab, approved by the U.S. Food and Drug Administration (FDA) to treat both bladder cancer and non-small cell lung cancer, could be used along with chemotherapy to improve clinical outcomes in patients with triple-negative breast cancer.

Atezolizumab belongs to a class of immunotherapy medications known as checkpoint inhibitors. The drug targets the PD-L1 protein, which in triple-negative breast cancer patients is found mostly on immune cells that infiltrate the tumor. Blocking PD-L1 reinvigorates these immune cells, allowing them to attack the tumor.[3][4]

The trial enrolled 902 patients with either metastatic or locally advanced triple-negative breast cancer that could not be surgically removed. Patients were enrolled at 246 sites in 41 countries across the world and were randomly assigned to receive either atezolizumab or a placebo, along with the chemotherapy drug nab-paclitaxel.

In the overall patient population, the researchers found a statistically significant increase in progression-free survival in patients treated with both nab-paclitaxel and atezolizumab – 7.2 months when compared to 5.5 months in patients who received chemotherapy alone. In the group of patients who expressed the PD-L1 protein on tumor-infiltrating immune cells, the combination treatment had a more significant impact on progression-free survival – 7.5 months versus 5 months.

Overall survival was 21.3 months in the combination treatment group as compared to 17.6 months with chemotherapy alone, though this did not reach statistical significance in this first analysis. In the group of patients who expressed PD-L1 on their tumors, the difference in survival was greater, with overall survival of 25 months, in contrast to 15.5 months in patients treated with nab-paclitaxel alone.

The adverse events observed were similar to the known adverse event profile of the two drugs. Patients who received both immunotherapy and nab-paclitaxel experienced a higher frequency of adverse events that were potentially immune-related, than those who received chemotherapy alone, at 7.5% versus 4.3%, respectively.

The trial was funded by Genentech/Roche, which provided atezolizumab and placebo and collaborated with an academic steering committee regarding the trial design and data collection, analysis and interpretation. Celgene provided nab-paclitaxel and had no role in the trial design, data collection or analysis, however, the company but did review the manuscript.