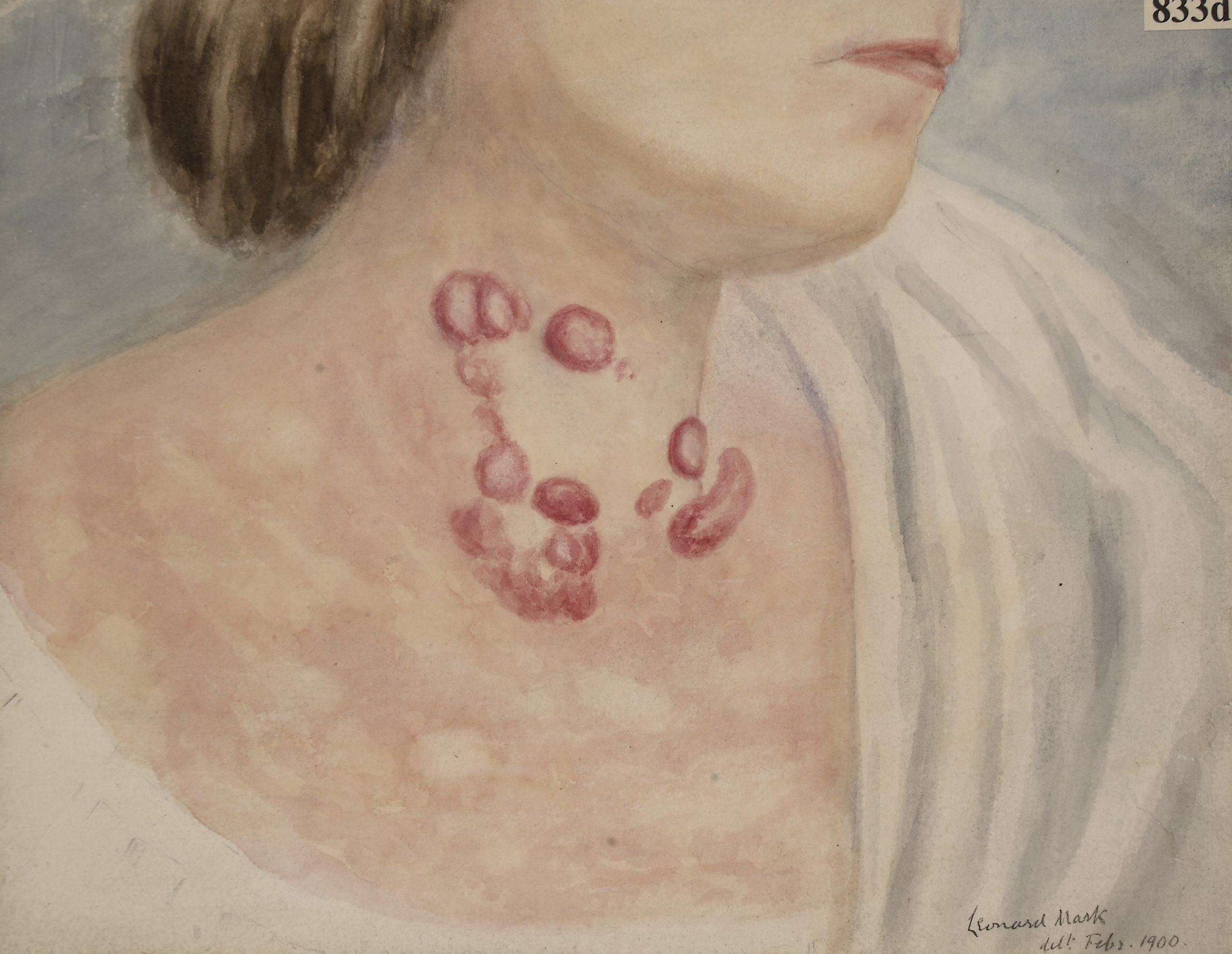 PDT is a treatment that uses a light source, administered externally, to treat conditions within or below the skin. In some cases treatment involves the use of a photosensitizer, which primes tissues for PDT treatment and is administered prior to light treatment. Here the activating agent is topical hypericin, an anthraquinone derivative from the herb, St. John’s wort.

Mycosis fungoides/CTCL is a rare, chronic, usually slow-progressing form of Non-Hodgkin’s Lymphoma (NHL) in which the skin becomes infiltrated with lymphocyte-containing plaques and nodules. In advanced cases, the disease may spread to the gastrointestinal system, liver, spleen, or brain.[2]

Since MF/CTCL is chronic and of long duration, there is a need for therapies with minimal short- and long-term side effects. This study examined a synthetic form of hypericin, as a 0.25% ointment, activated with visible light. The study objectives were to determine the safety and effectiveness of this non-mutagenic treatment in early-stage disease.

Study design
This multicenter, placebo-controlled, double-blinded, phase 3 randomized trial was conducted from late 2015 to late 2020 at 39 academic and community-based US medical centers. This landmark trial was the largest double-blind, randomized, placebo-controlled trial in CTCL to date. Investigators recruited 169 adults (≥18 years) with early-stage MF/CTCL to receive three treatment cycles. In the first cycle, subjects received either hypericin or placebo treatment on three “index” lesions, twice per week for six weeks. During cycle two all patients received the active drug for six weeks. In cycle 3, which was optional, both index and additional lesions were treated with hypericin.

Study results
The primary endpoint was the response rate during cycle 1, defined as 50% or greater improvement in a modified Composite Assessment of Index Lesion Severity (mCAILS) score from baseline after six weeks in the index lesions. Secondary endpoints were the open-label response rates in cycles 2 and 3.  Adverse events were assessed at each treatment visit, after each cycle, and then monthly for 6 months.

After cycle one, at six weeks, hypericin PDT was more effective than placebo (response rate 16% vs 4%; P = .04). The response rate increased to 40% in patients who received 2 cycles of hypericin PDT (P < .001 vs cycle 1) and to 49% after 3 cycles (P < .001 vs cycle 1). Investigators noted responses in both patch and plaque lesions that were similar across age, sex, race, disease stage, time since diagnosis, and number of prior therapies. Adverse events were mild, mostly affected the application area, and were similar for treatment and placebo groups.

Investigators concluded that synthetic hypericin PDT is effective in early-stage patch and plaque MF/CTCL and has a potentially more favorable safety profile than available topical approaches in early-stage patients.

Featured image: Watercolour drawing of the neck of a woman suffering from mycosis fungoides. There is a diffuse patchy erythema over the neck and chest, with a group of round and oval, smooth, red elevations. Photo courtesy: Welcome Trust/St Bartholomew’s Hospital Archives & Museum SBHB MU/14/35/88/1 / Photo number: L0061976 / Wellcome Collection gallery (2018-03-31). CC-BY-4.0 | Used with permission.