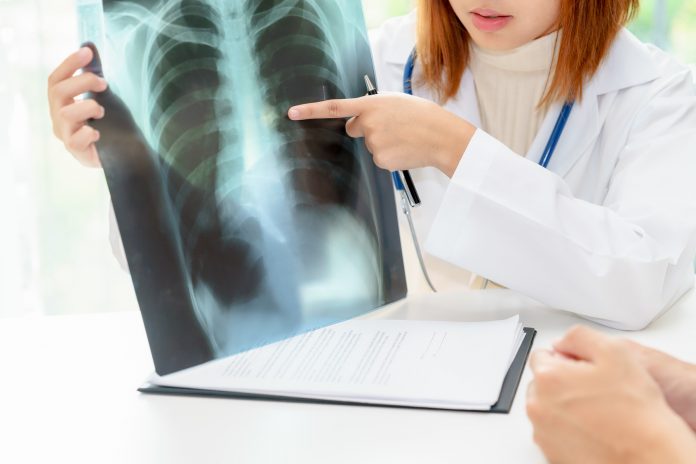 The United States Food and Drug Administration (FDA) has accepted a supplemental Biologics License Application (sBLA) for atezolizumab (Tecentriq?; Roche/Genentech) in combination with albumin-bound paclitaxel or nab-paclitaxel (Abraxane?; Abraxis Bioscience/Celgene) and carboplatin (Pfizer/Hospira) for the initial, first-line, treatment of patients with metastatic non-squamous non-small cell lung cancer (NSCLC) who do not have EGFR or ALK genomic tumor aberrations.

Atezolizumab is a monoclonal antibody designed to bind with a protein called PD-L1 expressed on tumour cells and tumour-infiltrating immune cells, blocking its interactions with both PD-1 and B7.1 receptors. By inhibiting PD-L1, atezolizumab may enable the activation of T cells. Atezolizumab has the potential to be used as a foundational combination partner with cancer immunotherapies, targeted medicines and various chemotherapies across a broad range of cancers.

The FDA is expected to make a decision on approval by September 2, 2019.

Lung cancer is a challenging disease to treat, and this review takes us one step closer towards offering a new treatment option that has shown a clinically meaningful survival benefit in the treatment of this type of disease…

Lung Cancer
Lung cancer is the leading cause of cancer death globally.[1] Each year 1.76 million people die as a result of the disease; this translates into more than 4,800 deaths worldwide every day.[1] Lung cancer can be broadly divided into two major types: NSCLC and small cell lung cancer. NSCLC is the most prevalent type, accounting for around 85% of all cases.[3] NSCLC comprises non-squamous and squamous-cell lung cancer, the squamous form of which is characterised by flat cells covering the airway surface when viewed under a microscope.[2]

?We look forward to working with the FDA in order to bring this Tecentriq-based combination to people with non-squamous non-small cell lung cancer as soon as possible,? said Sandra Horning, MD., Chief Medical Officer and Head of Global Product Development for Roche and Genentech.

?Lung cancer is a challenging disease to treat, and this review takes us one step closer towards offering a new treatment option that has shown a clinically meaningful survival benefit in the treatment of this type of disease,? added Horning, who has had a long and distinguished career in cancer treatment and research, first as a practicing oncologist, investigator and professor at Stanford University for 25 years, then at the San Francisco-based biotech company Genentech, which merged with Roche in 2009.

The FDA recently approved atezolizumab in combination with Avastin, paclitaxel and carboplatin (chemotherapy) for the initial treatment of people with metastatic non-squamous NSCLC with no EGFR or ALK genomic tumour aberrations.

During the treatment-induction phase, people in Arm A received atezolizumab and carboplatin on day 1 of each 21-day cycle, and nab-paclitaxel on days 1, 8 and 15 of each 21-day cycle for 4 or 6 cycles or until loss of clinical benefit, whichever occurred first.

People in Arm A received atezolizumab during the maintenance treatment phase until loss of clinical benefit was observed.

During the treatment-induction phase, people in Arm B received carboplatin on day 1 and nab-paclitaxel on days 1, 8 and 15 of each 21-day cycle for 4 or 6 cycles or until disease progression, whichever occurred first. People in Arm B received best supportive care during the maintenance treatment phase. A switch maintenance to pemetrexed (Alimta?; Eli Lilly and Company) was also permitted. Patients who were consented prior to a protocol revision were given the option to crossover following disease progression to receive atezolizumab as monotherapy until further disease progression.

Regulatory approval
Atezolizumab is already approved in the European Union, United States and more than 85 countries for people with previously treated metastatic NSCLC and for certain types of untreated or previously treated metastatic urothelial carcinoma (mUC). Tecentriq was also recently approved in the United States for the initial treatment of people with metastatic non-squamous NSCLC with no EGFR or ALK genomic tumour aberrations.
About Roche in cancer immunotherapy