The latest chapter in Otis W. Brawley, MD’s illustrious career in cancer prevention and control commenced earlier this month when he began his tenure as a Bloomberg Distinguished Professor at Johns Hopkins University in Baltimore.

During an exclusive interview with Onco’Zine, Brawley, 59, followed up on his promise in November to share information about what he then termed as a “tremendous opportunity to increase my impact in health disparities and cancer screening and how health care is applied.”

He told me that his appointment at Hopkins would also mean that he would be spending more time working on public policy issues down the road in Washington, DC, and he emphatically proclaimed that the position would afford him “more freedom to speak and academic independence.”

In November, Brawley, a medical oncologist and leading expert in cancer prevention and control, resigned after serving as chief medical and scientific officer and executive vice president with the national American Cancer Society for 11 years.

He did not go into detail at that time about the circumstances related to the timing of his departure, but told me during our recent telephone interview that Hopkins began recruiting him as a Bloomberg Distinguished Professor in February 2018.

Bloomberg Professorship
The Bloomberg program was established in 2015 with a $350 million gift from philanthropist and former New York City Mayor Michael R. Bloomberg, who is a Hopkins graduate.

Brawley is the 39th recipient of the title, which will ultimately be held by a total of 50 scholars charged with addressing major world problems and teaching the next generation of physicians, scientists, and academics.

He will lead an interdisciplinary research effort focused on reducing racial, economic, and social disparities in preventing, detecting, and treating cancer in the United States and globally, and have appointments at both Hopkins’ Bloomberg School of Public Health and its Sidney Kimmel Comprehensive Cancer Center.

Brawley said that he also plans to continue his clinical activities at the cancer center, and will teach cancer epidemiology to both undergraduate and graduate students in the school of public health as well as teach in the medical school.

Why Hopkins?
“This is really a fabulous job and will allow me to work day in and day out? with the many amazing? people I’ve respected who are already doing community outreach at Hopkins,” he said, noting that he had been able to collaborate with many of them in the past during his time with the American Cancer Society.

“And one of the biggest attractions at Hopkins is its spectacular faculty and amazing students, and the opportunity to help shape the next generation of cancer prevention and control scientists,” he said.

The Bloomberg professorship will allow Brawley to merge all of his professional passions in an unfettered capacity.

“I tend to be a magnet for attention,” he admitted, “and cancer prevention and disparities are areas that need attention.”

After spending his early career at the National Cancer Institute?s division of cancer prevention, he left for Atlanta in 2001 to become deputy director for cancer control at Emory’s Winship Cancer Institute and medical director of Grady Memorial Hospital’s cancer center, before joining American Cancer Society in 2007 as its chief medical and scientific officer.

“I’ve spent time in government service, working for a foundation, and now I?m back in academia, and although I haven?t worked in industry, I have had experience in drug development.”

“I’ve had the opportunity to be a cancer center director at several places, and to run institutes that look at health outcomes and disparities, and of all those choices, I chose this,” he explained.

Rational Medicine
Brawley has long been a critic of over-screening, over-diagnosis, and over-treatment in cancer, and has been a vocal proponent of what he calls “rational medicine.”

“I don’t mean rationing medicine, but applying what we already know about cancer in a rational way.

He said that with today’s high costs of health care and the unnecessary use of many medical interventions, he intends to continue to be a ?thought leader? in cancer control, to focus on affecting behavior in the community, and to encourage good science and the application of good science.

Future Testimony
And in addition to helping educate the public and medical practitioners about rational medicine and the need for increased cancer prevention, he intends to take this message to Congress.

Brawley said the he has testified numerous times before Congress in the past and is being encouraged by Hopkins to continue appearing before and appealing to legislators about cancer prevention and disparity issues.

“American culture is more focused on individuals than group dynamics, and one lesson I learned during many congressional testimonies was that congressmen aren?t interested in population statistics and rates, but anecdotes,” he said, adding that this makes it especially important to increase understanding about population medicine and epidemiology, not only to the public and Congress, but to doctors as well, and to get them to understand that prevention and control can reduce cancer risk.

One example he cited was a study he had done several years ago in Atlanta that showed that 7% of black women and 3% of white women who had heard messages about getting mammograms and were diagnosed with early stage breast cancer did not receive any treatment during their first year of diagnosis.

He said that while at American Cancer Society he and his team started interventions to encourage people to carry through with their treatment that included navigation programs, and community education and outreach regarding health behaviors. He added that some of these programs were based on anti-smoking initiatives.

Other examples of a health disparities include:

Brawley noted that disparities can also exist in affluent communities where some people with health insurance may be subject to over-screening, over-diagnosis, and over-treatment for breast or prostate cancer resulting in the “misapplication of a lot of technologies that we have that can lead to huge disparities and increased costs?while these individuals may not have been told to exercise and watch their diets.”

He also said that health care costs in the U.S. are about twice as much as many European nations with outcomes that are no better.

21st Century Vision
Brawley’s vision of a 21st century NCI-designated cancer center involves having centers serving the communities in which they are located.

“Not just by providing health care, but also by being active in defining what are the problems in the communities that are served, and educating those communities to be healthy and about cancer prevention. For instance,” he added, “obesity has become a bigger cause of cancer than tobacco in many United States communities, and many “people don’t realize this.” 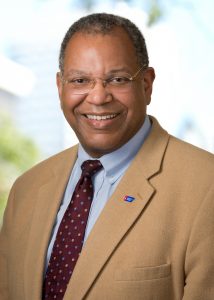 Born in Detroit, Brawley received both his undergraduate and medical degrees at the University of Chicago, and did his internal medicine training at Cleveland’s Case Western Reserve and medical oncology fellowship at the National Cancer Institute.

He was elected to the National Academy of Medicine (formerly the Institute of Medicine) in recognition of his expertise in cancer prevention and control in 2015, and was recently named to the NCI?s Board of Scientific Advisors.

With Paul Goldberg he co-authored How We Do Harm — A Doctor Breaks Ranks About Being Sick in America, published by St. Martin’s Press in 2011, and last July he and colleagues at ACS published “An Assessment of Progress in Cancer Control in CA: A Cancer Journal for Clinicians.”

Brawley is now hoping that his new Bloomberg-based bully pulpit will help him continue to propel the importance of prevention and reducing disparities with the freedom to pursue a scientific agenda free of any other agenda.

This is the first installment of a series of new beginnings for distinguished members of the cancer community.