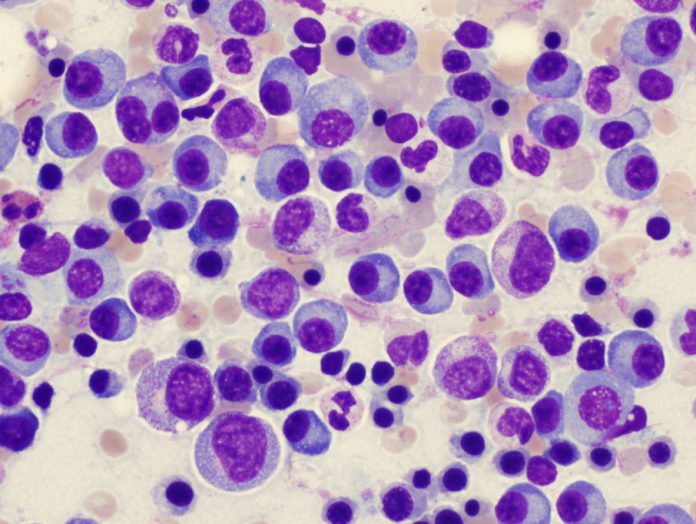 In a head-to-head comparison, carfilzomib (Kyprolis?; Amgen) has, compared to current standards of care, shown to extends overal survival in patients with relapsing multiple myeloma therapy.

The results are based on an overall survival (OS) analysis of the Phase III ENDEAVOR trial (NCT01568866) ?which were published online first in The Lancet Oncology.

The randomized ENDEAVOR (RandomizEd, OpeN Label, Phase III Study of Carfilzomib Plus DExamethAsone Vs Bortezomib Plus DexamethasOne in Patients With Relapsed Multiple Myeloma) trial of 929 patients evaluated Kd56 versus Vd in patients whose multiple myeloma has relapsed after at least one, but not more than three, prior therapeutic regimens. The primary endpoint of the trial was PFS, defined as the time from treatment initiation to disease progression or death. The primary analysis was published in The Lancet Oncology and is described in the Prescribing Information.

In this trial, patients received treatment until progression with carfilzomib as a 30-minute infusion on days 1, 2, 8, 9, 15 and 16 of 28 day treatment cycles, along with low-dose dexamethasone (20 mg). For Cycle 1 only, carfilzomib was administered at 20 mg/m2 on days 1 and 2, and if tolerated was escalated to 56 mg/m2 from day 8 Cycle 1 onwards. Patients who received bortezomib (1.3 mg/m2) with low-dose dexamethasone (20 mg) were treated with bortezomib administered subcutaneously or intravenously at the discretion of the investigator and in accordance with regional regulatory approval of bortezomib. More than 75% of the patients in the control arm received bortezomib subcutaneously. This study was conducted at 235 sites worldwide.

Trial Results
Data showed that carfilzomib administered at 56 mg/m2 twice weekly and dexamethasone (Kd56) reduced the risk of death by 21% over bortezomib (Velcade?; Takeda Oncology) and dexamethasone (Vd), resulting in a 7.6 month OS benefit (median OS 47.6 months for Kd56 versus 40.0 for Vd, HR=0.79; p=0.01). The OS benefit was consistent regardless of prior Velcade therapy (HR=0.75 for no prior bortezomib; HR=0.84 for prior bortezomib). This Kd56 regimen is already approved in the U.S., European Union and other countries based on the primary analysis of progression-free survival (PFS) in the ENDEAVOR study.

Multiple Myeloma
Multiple myeloma is an incurable blood cancer, characterized by a recurring pattern of remission and relapse.[1] It is a rare and very aggressive disease that accounts for approximately one percent of all cancers.[2][3] In the U.S., there are nearly 95,000 people living with, or in remission from, multiple myeloma.[4] Approximately 30,330 Americans are diagnosed with multiple myeloma each year and 12,650 patient deaths are reported on an annual basis. [4]

Proteasomes play an important role in cell function and growth by breaking down proteins that are damaged or no longer needed. [5]?carfilzomib has been shown to block proteasomes, leading to an excessive build-up of proteins within cells. [5] In some cells, carfilzomib can cause cell death, especially in myeloma cells because they are more likely to contain a higher amount of abnormal proteins. [5][6]

?These results showed [carfilzomib]?and dexamethasone significantly reduced the risk of death compared to [bortezomib]?and dexamethasone in patients with relapsed or refractory multiple myeloma,? said study co-author and investigator Meletios A. Dimopoulos, M.D., professor of Clinical Therapeutics at the National and Kapodistrian University of Athens, School of Medicine.

?These results support the use of [carfilzomib]?and dexamethasone as a standard of care for multiple myeloma patients at first relapse.?

Adverse events observed in this updated analysis were consistent with those previously reported for carfilzomib. Notably, rates of grade 2 or higher peripheral neuropathy, a frequent dose-limiting toxicity of bortezomib, were five-times lower in patients receiving Kd56 versus patients receiving Vd (7% versus 35%, respectively). The most common adverse events (greater than or equal to 20 percent) in the carfilzomib arm were anemia, diarrhea, pyrexia, dyspnea, fatigue, hypertension, cough, insomnia, upper respiratory tract infection, peripheral edema, nausea, bronchitis, asthenia, back pain, thrombocytopenia and headache.

Since its approval in 2012, carfilzomib has been prescribed to over 50,000 patients worldwide. The carfilzomib clinical program continues to focus on providing solutions for physicians and patients in treating this frequently relapsing and difficult-to-treat cancer. Carfilzomib is available for patients whose myeloma has relapsed or become resistant to another treatment and continues to be studied in a range of combinations and patient populations.