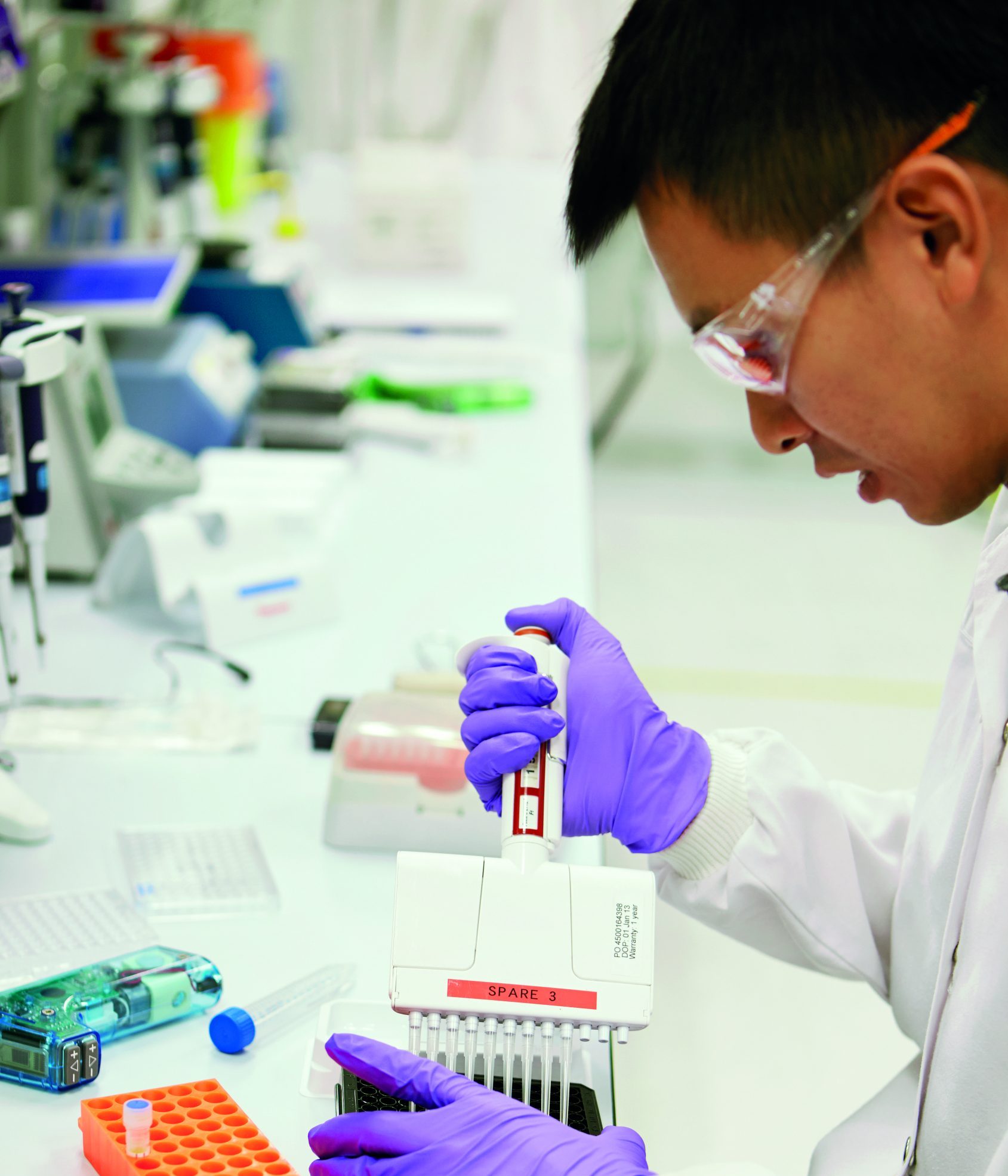 Multiple myeloma is the second most common hematological malignancy in the United States and is generally considered treatable, but not curable. [2] Multiple myeloma is a relatively uncommon cancer with a lifetime risk of getting the disease estimated at 1 in 132 (0.76%). According to the American Cancer Society, an estimated 32,270 people (17,530 in men and 14,740 in women) are will be diagnosed with multiple myeloma this year, and about 12,830 deaths are expected to occur (7,190 in men and 5,640 in women)[3]

Multiple myeloma affects plasma cells. The disease develops in the bone marrow crowding out the normal, healthy, plasma cells that help fight infection. In multiple myeloma, malignant plasma cells produce an abnormal antibody called M protein, which may cause tumors, kidney damage, bone destruction, and impaired immune function. With the growth of the malignant cells, there is less space for the healthy cells, which, in time, results in a decreased number of red blood cells, white blood cells, and platelets, causing anemia, excessive bleeding, and decreased ability to fight infection.

Furthermore, the buildup of M protein in the blood and urine can damage the kidneys and other organs. Bone damage can cause bone pain and osteolytic lesions, which increases the risk of fractures.

Depending on the classification of a patient’s disease management may include, treatment with proteasome inhibitors, immunomodulatory drugs (IMiDs), steroids, histone deacetylase (HDAC) inhibitors, antibodies, or chemotherapy.

Major improvements
Although the treatment of multiple myeloma has dramatically improved due to the availability of immunotherapies. More research into new therapies is needed as multiple myeloma commonly becomes refractory to available treatments. [4]

During the American Society of Hematology (ASH) Annual Meeting and Exposition, hosted virtually from 5-8 December 2020 results from multiple studies discussing novel treatment options will be presented.

Belantamab mafodotin is an antibody-drug conjugate or ADC, a highly targeted biopharmaceutical drug that combines monoclonal antibodies specific to surface antigens present on particular tumor cells with highly potent anti-cancer agents linked via a chemical linker. In belantamab mafodotin, the potent anti-cancer drug is monomethyl auristatin-F(MMAF). a member of the dolastatin family of microtubule inhibitors, potent anti-tumor agents that can lead to immunogenic cell death (ICD), a type of cell death that stimulates host immune responses.

With nine approved drugs on the market, ADCs have become a powerful class of therapeutic agents in oncology and hematology.

Function of BCMA
The normal function of BCMA is to promote plasma cell survival by transduction of signals from two known ligands, BAFF (B-cell activating factor) and APRIL (a proliferation-inducing ligand). This pathway has been shown to be important for myeloma cell growth and survival.

BCMA expression is limited to B cells at later stages of development. BCMA is expressed at varying levels in myeloma patients and BCMA membrane expression is universally detected in myeloma cell lines.[5][1]

DREAMM
‘The presentations planned during the American Society of Hematology (ASH) Annual Meeting and Exposition include data from the extensive DREAMM (DRiving Excellence in Approaches to Multiple Myeloma) clinical trial program, which is evaluating belantamab mafodotin in different lines of therapy, and in combination with standard of care and novel therapies.

“Belantamab mafodotin is a significant advance for patients with relapsed or refractory multiple myeloma who previously had limited treatment options available. We believe that via our ongoing research […] in combination with other agents, and in earlier lines of treatment, we have the potential to continue to address the unmet needs of multiple myeloma patients and redefine the way this cancer is treated,” noted Axel Hoos, M.D., Ph.D., Senior Vice President and Head of Oncology R&D, GSK.

Key studies being presented at ASH will demonstrate the potential of belantamab mafodotin in combination with standard therapies in earlier lines of treatment and include:

Analysis
The analysis of the DREAMM studies confirms that single-agent belantamab mafodotin demonstrated deep and durable responses with a manageable safety profile in patients with heavily pretreated refractory or relapsed multiple myeloma (median 7 lines of prior therapy) treated with an immunomodulatory agent (IMiD), a proteasome inhibitor (PI), and and/or intolerant to an anti-CD38 monoclonal antibody in the pivotal Phase II DREAMM-2 study (NCT03525678). In addition, data from a 13-month follow-up further demonstrated that single-agent belantamab mafodotin was well-tolerated with clinically meaningful responses which were sustained despite dose modifications with longer follow-up. The results showed an overall response rate (ORR) was 32% and the median duration of response (DoR) was 11.0 months in the belantamab mafodotin 2.5 mg/kg arm. [5][6]

Combination
The multimodal mechanism of action, efficacy, and safety profile of belantamab mafodotin, as well as preclinical data, suggest possible synergy with the standard of care agents and a potential benefit in combination with IMiDs and PIs. The ability of IMiDS to enhance immune responses including antibody-dependent cellular cytotoxic (ADCC) forms, for example, the basis for combining belantamab mafodotin with pomalidomide.

The results from one study demonstrated belantamab mafodotin to have clinically meaningful activity and a manageable safety profile in patients with refractory or relapsed multiple myeloma.

In this study, eligible patients had received > 2 prior lines of treatment, were exposed to lenalidomide and a proteasome inhibitor, and were refractory to their last line of therapy. Pomalidomide was administered at 4 mg days 1-21, dexamethasone 40 mg (20 mg age > 75 years) weekly in conjunction with IV belantamab mafodotin SINGLE (1.95 or 2.5 mg/kg, day 1) or belantamab mafodotin SPLIT (2.5 or 3.4 mg/kg, split equally on days 1 and 8) Q4W. based on the results of the study a maximum tolerated dose was established as 2.5 mg/kg SINGLE and 2.5 mg/kg SPLIT in combination with standard dosing of pomalidomide and dexamethasone. At the time of the median follow-up of 6 months, 29 patients were evaluable for response. Across all cohorts, the ORR was 86.2% (6 Partial Response/PR, 15 very good partial response/VGPR and 4 stringent complete response/sCR). The median number of cycles administered was 6 (range 1-20). A total of 8 patients discontinued treatment due to progressive disease (PD) (n=5), patient decision (n=2), and adverse events of Grade 4 decreased VA (n=1); 27 patients are ongoing. The median Progression-Free Survival (mPFS) has not been reached in any of the treatment groups.

These results show promising efficacy. The treatment-emergent Adverse Events (AE) were considered acceptable and consistent with the known safety profiles for belantamab mafodotin and pomalidomide. The study authors note that the high rate of dose holds at the 2.5 mg/kg dose has prompted exploration of alternative dosing schedules.

Approval
Belantamab mafodotin was approved earlier this year in the United States and in the European Union for the treatment of patients with relapsed and/or refractory multiple myeloma who have received at least four prior therapies including an anti-CD38 monoclonal antibody, a proteasome inhibitor, and an immunomodulatory agent.

During the annual meeting of the American Society of Hematology (ASH) Annual Meeting and Exposition, GlaxoSmithKline/GSK-sponsored presentations include:

This article was first published in ADC Review | Journal of Antibody-drug Conjugates on December 5, 2020.