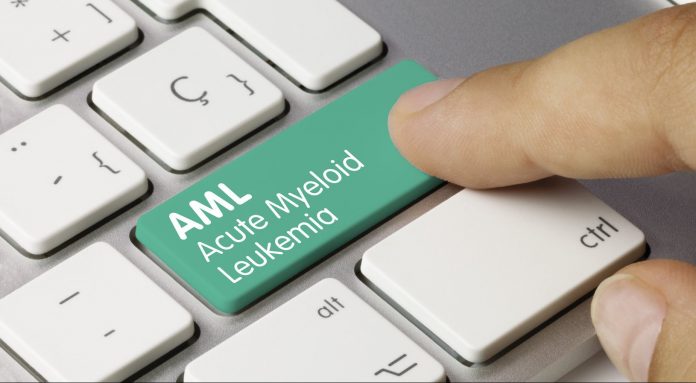 An active ingredient in eye drops called SPHINX31, being developed for the treatment of a form of eye disease, has shown promise for treating an aggressive form of blood cancer called Acute Myeloid Leukemia or AML.

Scientists at the Wellcome Sanger Institute, University of Cambridge, University of Nottingham and their collaborators have found that this compound, which targets an essential cancer gene, could kill leukemia cells without harming non-leukemic blood cells.

The results of the study, published in Nature Communications and funded Wellcome, the Kay Kendall Leukaemia Fund, Cancer Research UK and Exonate, reveal a potential new treatment approach for an aggressive blood cancer with a poor prognosis.[1]

AML is a form of blood cancer that affects people of all ages, often requiring months of intensive chemotherapy and prolonged hospital admissions. It develops in cells in the bone marrow crowding out the healthy cells, in turn leading to life-threatening infections and bleeding.

Mainstream AML treatments have remained unchanged for over thirty years, with the current treatment being chemotherapy, and the majority of people’s cancer cannot be cured. A subtype of AML, driven by rearrangements in the MLL gene has a particularly bad prognosis.

CRISPR
In a previous study, researchers at the Sanger Institute developed an approach, based on clustered regularly interspaced short palindromic repeats (CRISPR) gene editing technology, which helped them identify nearly 500 AML-specific cell-essential genes as possible therapeutic targets, including several established therapeutic targets such as DOT1L, BCL2, and MEN1, and many other genes including clinically actionable candidates, for different subtypes of AML.[2]

One of the genes, SRPK1, was found to be essential for the growth of MLL-rearranged AML. SRPK1 is involved in a process called RNA splicing, which prepares RNA for translation into proteins, the molecules that conduct the majority of normal cellular processes, including growth and proliferation.[2]

Inhibition of SRPK1
In a new study, Sanger Institute researchers and their collaborators set out to work out how inhibition of SRPK1 can kill AML cells and whether it has therapeutic potential in this disease.

The scientists first showed that genetic disruption of SRPK1 stopped the growth of MLL-rearranged AML cells and then went on to study the compound SPHINX31, also called 5-(4-pyridinyl)-N-[2-[4-(2-pyridinylmethyl)-1-piperazinyl]-5-(trifluoromethyl)phenyl]-2-furancarboxamide, a potent inhibitor of serine/arginine-rich protein kinase 1 (SRPK1; IC50 = 5.9 nM), which was being used to develop an eye drop treatment for retinal neovascular disease, the growth of new blood vessels on the retinal surface that bleed spontaneously and cause vision loss.*

“We have discovered that inhibiting a key gene with a compound being developed for an eye condition can stop the growth of an aggressive form of acute myeloid leukaemia without harming healthy cells. This shows promise as a potential approach for treating this aggressive leukemia in humans,” noted George S. Vassiliou, Ph.D, joint leader of the research from the Wellcome Sanger Institute and the Wellcome-MRC Cambridge Stem Cell Institute.

SRPK1 controls the splicing** of RNA in the production of new proteins. An example of a gene that is affected when SRPK1 is blocked is BRD4, a well-known gene that maintains AML. Inhibiting SRPK1 causes the main form of BRD4 to switch to another form, a change that is detrimental to AML growth.

“Our study describes a novel mechanism required for leukemia cell survival and highlights the therapeutic potential of SRPK1 inhibition in an aggressive type of AML. Targeting this mechanism may be effective in other cancers where BRD4 and SRPK1 play a role, such as metastatic breast cancer,” explained Konstantinos Tzelepis, joint lead author from the Wellcome Sanger Institute and University of Cambridge.

“When Vassiliou told me that SRPK1 was required for the survival of a form of AML, I immediately wanted to work with him to find out if our inhibitors could actually stop the leukemia cells growing,” said Professor David Bates, Ph.D, from the University of Nottingham and co-founder of biotech company Exonate, which develops eye drops for retinal diseases.

“The fact that the compound worked so effectively bodes well for its potential development as a new therapy for leukemia. It will take some time, but there is real promise for a new treatment on the horizon for patients with this aggressive cancer,” Bates concluded.

*SPHINX31 is selective for SRPK1 over a panel of 50 kinases at a concentration of 1 ?M.? The compound inhibits phosphorylation of SRSF1, an SRPK1 substrate, in PC3 cells (EC50 = 360 nM) and increases expression of the anti-angiogenic VEGF-A165b splice variant in retinal pigment epithelial (RPE) cells. In vivo, SPHINX31 (2 ?g per eye) inhibits blood vessel growth and macrophage infiltration in the eyes of a mouse model of choroidal neovascularization.

**Splicing is the preparation of RNA for the production of proteins. From the strand of RNA, non-coding regions (introns) are removed, leaving the coding regions (exons) which are needed for the assembly of amino acids to form proteins.