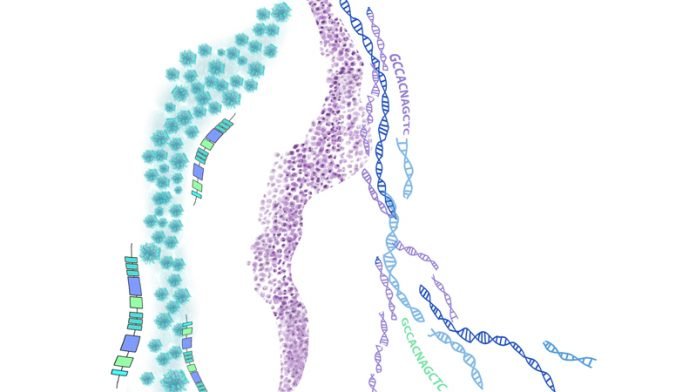 Two clinical studies by researchers at Johns Hopkins Kimmel Cancer Center and published this earlier this month confirm that liquid biopsies, a simple and noninvasive test based on a simple blood draw and considered an alternative to surgical biopsies, enable doctors to diagnose cancer as well as find out other relevant information about a tumor by measuring cell-free circulating tumor DNA (ctDNA), can accurately track lung cancer treatment responses.

The concept of liquid biopsies is based on the premise that cancer cells shed DNA into the bloodstream through apoptosis, necrosis, or secretion. Cell-free circulating tumor DNA freely circulates in the bloodstream and can be isolated and sequenced, revealing mutations and other changes to the patient’s genetic material.

By measuring ctDNA during immunotherapy and related treatments, liquid biopsies confirm how and which treatments are most likely to work for a patient. Liquid biopsies may also help doctors understand what kind of molecular changes are taking place in a tumor, helping them to adequately respond and changed therapies if required.

Real-time detection
With the onset of novel, targeted and personalized treatment options, it is important that physicians can rapidly detecting responses to these therapies. And while traditional, invasive, biopsies have been an integral part of cancer care and treatment for decades, novel methods to confirm real-time response to treatment has been missing.

?Our studies suggest that tests using blood samples will change the way cancer patients will be treated by helping to evaluate therapeutic responses more quickly and accurately, and avoid unneeded toxicity or ineffective treatments,? Velculescu added.

The new studies, described in the December 2018 issues of the journal Cancer Research, showed that tracking responses to treatment by measuring ctDNA was a more accurate way of assessing tumor growth or shrinkage than traditional imaging techniques.

Patients participating in the study were seen at hospitals affiliated with The Johns Hopkins University or University of California San Diego, California, and were treated with osimertinib (Tagrisso?; AstraZeneca),mavelertinib (previously known as PF 6747775; Pfizer), afatinib (Gilotrif?; Boehringer Ingelheim Pharmaceuticals) or erlotinib (Tarceva?; Astellas Pharma US and Genentech).

The results showed that, as early as a week after receiving initial treatment, 16 patients with molecular response to treatment had nearly complete elimination of ctDNA that could be detected in their blood samples.

Eight nonresponders to the therapy had limited changes in ctDNA levels and significantly shorter progression-free survival. Overall, patient response to treatment could be detected four weeks earlier and was more accurate than CT imaging.

The research also showed that ctDNA analyses of patients with stable CTs or nonmeasurable disease using imaging had improved prediction of clinical outcomes compared to patients with CT imaging.

?These results indicate the potential value of early assessment of responses to targeted therapies especially when CT imaging results are in the gray area between objective response and actual disease progression,? explained Alessandro Leal, MD., a graduate student at the Kimmel Cancer Center.

The early detection of changes using ctDNA preceded responses seen in subsequent scans and allowed mutation changes in the tumors to be tracked. With these results, the study showed that measuring ctDNA for an advanced cancer can be accurate and noninvasive than with repeat CT imaging.

Anti-PD1 therapy
In a second study of 38 patients with NSCLC, scientists including Valsamo Anagnostou, MD., Ph.D., assistant professor of oncology at the Johns Hopkins University School of Medicine and a member of the Kimmel Cancer Center, measured ctDNA and immune blood cell changes to determine responses to anti-PD-1 therapy, which boosts the immune response against cancer cells.[2]

Nine patients with a clinical response to immunotherapy had a complete reduction in ctDNA levels shortly after the initiation of therapy. In contrast, 10 nonresponders showed no significant changes or increase in ctDNA levels. Molecular response, as measured by ctDNA levels, more accurately predicted overall survival for these patients?patients without a molecular response had shorter progression-free and overall survival than molecular responders. Overall, tumor responses to the therapy that were detected using ctDNA were found nearly nine weeks earlier than with conventional imaging.

Anagnostou and colleagues further investigated changes in the immune cells in the blood of these patients. Expansion of immune cells mirrored the ctDNA reduction during therapeutic response, suggesting that ctDNA reduction in circulating blood was in line with an effective immune response.

Anagnostou said that the researchers also validated their findings in a group of early stage NSCLC patients who received anti-PD1 therapy prior to removal of their tumors. The researchers, Anagostoi confirmed, found that ctDNA molecular responses accurately captured the effect of immunotherapy. The authors showed that reduction in tumor size after immunotherapy correlated with reductions in ctDNA levels.

In their article, authors write that “patients with clinical response to therapy had a complete reduction in ctDNA levels after initiation of therapy whereas, non-responders had no significant changes or an increase in ctDNA levels.” They also note that patients with initial response followed by acquired resistance to therapy had an initial drop followed by recrudescence (recurrence) in ctDNA levels. In contrast, patients without a molecular response had shorter progression-free and overall survival compared to molecular responders (5.2 vs 14.5 and 8.4 vs. 18.7 months, HR=5.36, 95% CI: 1.57-18.35, p=0.007 and HR=6.91, 95% CI: 1.37-34.97, p=0.02 respectively), which was detected on average 8.7 weeks earlier and was more predictive of clinical benefit than CT imaging. [2]

?Conventional imaging does not always or quickly capture the unique timing and pattern of response to immunotherapy, highlighting the urgent need to develop biomarker-driven approaches such as measuring ctDNA in blood samples,? Anagnostou noted.

?Early detection of disease progression on immunotherapy opens a window of opportunity in which changes in liquid biopsies may allow patients with resistance to be rapidly identified and redirected to receive alternative therapies.?

Together, these studies show that noninvasive liquid biopsy analyses of ctDNA changes during therapy are feasible and offer a more rapid and accurate assessment of treatment response than CT imaging. Velculescu cautions that more testing will be necessary to affirm the value of the results and to see if this method works for other types of cancer. He says he hopes the studies will spur development of new therapies by being able to diagnostically measure tumor loads more accurately.