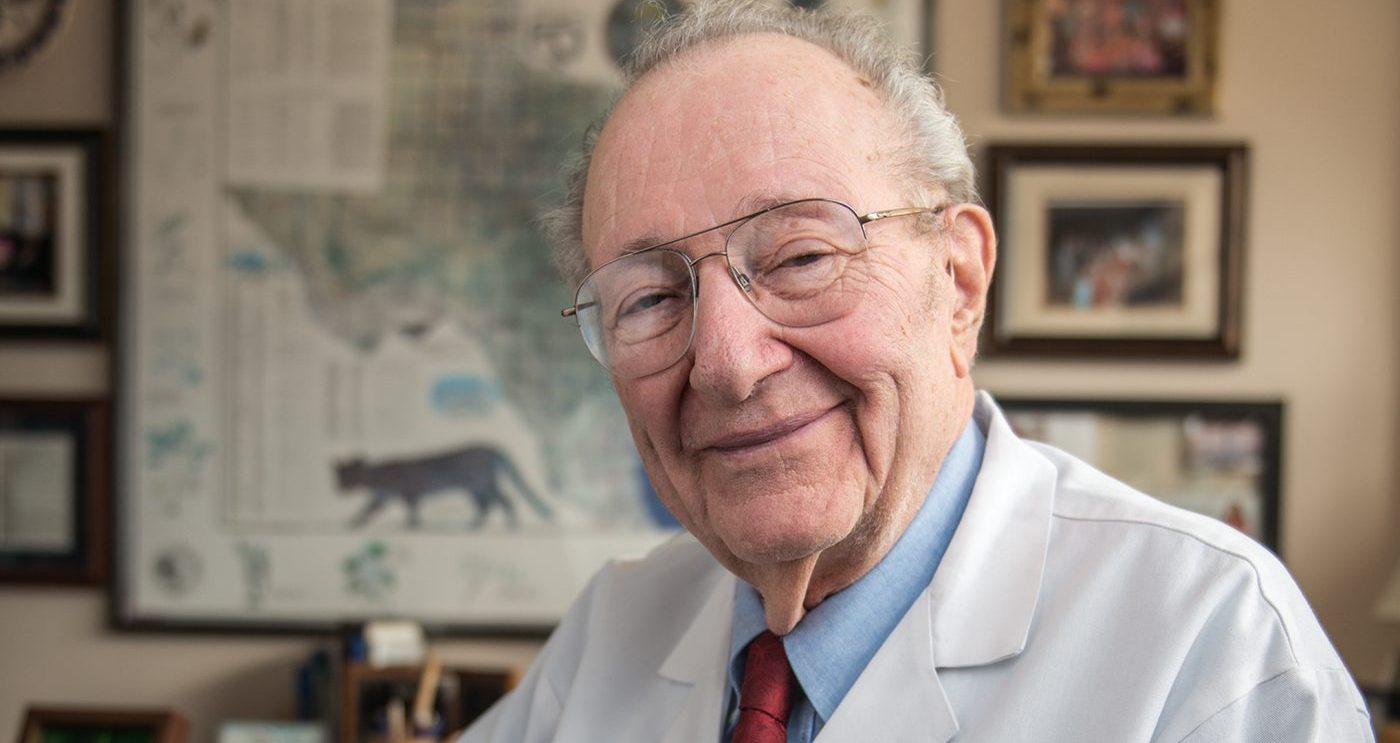 I last spoke with Emil J Freireich, MD, in 2013 on the occasion of the passing of his great friend and colleague, Emil “Tom” Frei III, MD.

The two Emils, along with James F. Holland, MD, and C. Gordon Zubrod, MD, began investigating the use of a combination of drugs to treat childhood leukemia in the late-1950s.

Freireich and Frei continued demonstrating that combination chemotherapy using as many as four drugs could produce lasting remissions in children with acute lymphoblastic leukemia (ALL) into the 1960s both at the National Cancer Institute and MD Anderson Cancer Center.

They also used the same approach for Hodgkin lymphoma, making it curable in many instances, and worked together on the problem of bleeding caused by chemotherapy, showing that infusing patients with blood platelets made it possible to provide larger, more effective doses of chemotherapy.

This approach would become a mainstay for treating many other cancers, with each drug attacking different parts of the cell’s physiology.

At the time I was writing a remembrance of Frei for Oncology Times and had the honor of speaking to both Freireich and Holland about their friend’s life and legacy.

Freireich noted that he first met Frei in 1955 at the NCI.  He was hired for the leukemia service and when he first went to his office he said: “I saw ‘Emil Frei III’ written on the door and thought that this was just like the government that they couldn’t spell my name—and then I looked inside and saw Tom.”

Freireich said that “It turned out my office was next door, and Tom and I became friends and colleagues then and for the rest of our lives.”  He added that their professional relationship was complementary and synergistic and that both of their families were also close and spent much time together.

“He provided administrative and psychological leadership and served as a buffer for me at NCI,” Freireich explained, noting that Frei had saved him from being fired three times, and had never abused power and was admired by everyone who worked for him: “He was the perfect person to lead programs that innovate.”

Coincidently both men had adopted their respective nicknames in lieu of using “Emil.”  Freireich’s middle initial was “J”—without a period–but it did not stand for anything, and he preferred to be called “Jay,” and Frei was known as “Tom” since he had been a fan of cowboy Tom Mix when he was a boy.

Upon learning of Freireich’s death in early February 2021 at the age of 93, at MD Anderson where he served on the faculty since 1965, I called former NCI Director Vincent T. DeVita Jr., MD, who considers Freireich a mentor.

DeVita said that he first met Freireich in 1963 when he joined NCI as a clinical associate, largely to avoid medical service in Viet Nam. He added that he had known about Frei and Freireich and had read some of their papers in the New England Journal of Medicine before he had joined NCI.

When he first worked on NCI’s leukemia service, DeVita said that he was “put off by him,” noting that he “looked as if he were walking down the hall and if there was no door, he would walk right through the wall. He knew what he wanted, and it was not easy to work with him, but I learned a lot from Jay.”

DeVita confirmed that Frei had indeed protected Freireich on numerous occasions and that Freireich’s alleged infractions involved his defiance of higher-up’s orders for him to cease his work with platelet transfusions, which stopped spontaneous bleeding in children with leukemia, allowing them to survive long enough for the combination chemotherapy to be effective.

Working on the solid tumor service in those days was depressing, according to DeVita, but working on the leukemia service was exciting because of what DeVita was witnessing Freireich accomplish with his patients.

DeVita said that he often found himself as an outsider because many of the other clinical associates heckled Freireich and thought he was crazy.  “Many of them had been warned by their professors not to get too close to Freireich, saying that [the NCI] was a good place to go to stay out of Viet Nam, but stay away from Freireich.”

However, DeVita said that by that third month he had become a “believer” in Freireich’s work, although many of his colleagues were still not convinced. He said that there were three kinds of people:  those who loved Jay, those who hated him, and those who didn’t know him.

“I became a believer in Jay and supported him, and that’s when I began doing the Hodgkin’s work,” he said, adding that of all his mentors, “the one who made the biggest impression on me was Jay.  A lot of my professors were disappointing, they believed because they were taught to believe rather than because they had some insight.  But Jay had insights and he didn’t think there was any room for pessimism in medicine.  If you weren’t an optimist, you probably were not going to do much.”

DeVita said that Freireich had a vision and could look at a whole problem and then see an individual patient and become very deeply involved with that patient. “And then he would step back and see the whole ward and know what he had to do. Not many people can do that, they either do one or the other or nothing.”

In 2016, DeVita and his daughter, journalist Elizabeth DeVita-Raeburn coauthored The Death of Cancer: After Fifty Years on the Front Lines of Medicine, a Pioneering Oncologist Reveals Why the War on Cancer Is Winnable–and How We Can Get There, which was considered by some to be critical in describing Freireich.

DeVita told me that a number of his own friends had been concerned about the depiction and that he himself was at first reluctant to portray his friend as difficult, but that his daughter convinced him that since Jay was such an intense person, it was important to portray his personality realistically.

So, when DeVita sent Freireich a copy, he noted that it was “tongue in cheek” and he didn’t think that it would bother Freireich. “Jay’s response was that he loved the book and thought it was very important,” said DeVita, who added that he had sent an email to Jay about two weeks before his death asking for a photo.

“I wrote that I had noticed that I didn’t have any pictures of him on my wall and asked him to send me a signed photo, but I never heard back.”

When writing our book this past year–Centers of the Cancer Universe: A Half-Century of Progress Against Cancer–my coauthor Donald L. “Skip” Trump, MD, and I also wrote to Freireich last spring requesting an interview, which he declined.*

DeVita told me that it was not surprising that he had passed on the interview since Freireich was not particularly interested in the structure or politics of NCI or cancer centers. Nonetheless, Jay and his colleagues still loom large in our history about cancer research and treatment because of their tremendous contributions to oncology.  And perhaps not coincidently, Freireich, Frei, Holland, Zubrod, and DeVita were among the 16 recipients of the 1972 Albert Lasker Clinical Medicine Research Award.

–
Note: * Centers of the Cancer Universe: A Half-Century of Progress Against Cancer, by Donald L. “Skip” Trump, MD, and Eric T. Rosenthal, is due to be published this fall by Rowman & Littlefield