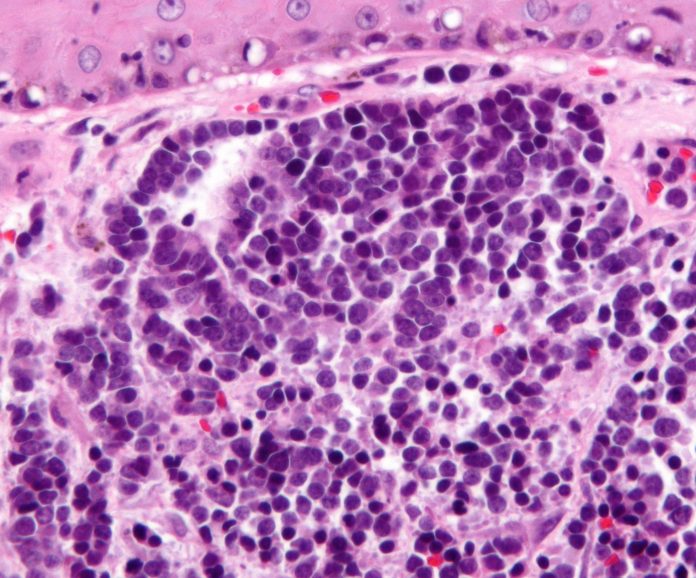 A study of pembrolizumab (Keytruda?; Merck & Co), an IgG4 isotype antibody that blocks a protective mechanism of cancer cells and thereby allows the immune system to destroy them, used as the initial treatment for patients with Merkel cell carcinoma, a rare but aggressive form of skin caused by the Merkel cell polyomavirus, shows better responses and longer survival than expected with conventional chemotherapy.

The phase II study (Cancer Immunotherapy Trials Network-09/Keynote-017), supported, in part, by the National Cancer Institute, the Merkel cell carcinoma patient gift fund at the University of Washington, Kelsey Dickson Merkel cell carcinoma challenge grant from the Prostate Cancer Foundation, and Merck, was led by Paul Nghiem, MD, Ph.D., affiliate investigator in the clinical research division at the Fred Hutchinson Cancer Research Center in Seattle, and professor of medicine in the division of dermatology at the University of Washington School of Medicine, who was the principal investigator and first author of the study.

The findings of the study were published in the December 19, 2018 edition of the Journal of Clinical Oncology, supported the recent U.S. Food and Drug Administration (FDA) accelerated approval of pembrolizumab as a first-line programmed cell death-1 therapy for adult and pediatric patients with advanced Merkel cell carcinoma.

Suzanne Topalian, MD, associate director of the Bloomberg-Kimmel Institute for Cancer Immunotherapy at the Johns Hopkins Kimmel Cancer Center, was one of the co-authors of the study, which was the longest observation of patients with Merkel cell carcinoma treated with any anti-PD-1 immunotherapy drug used in the first line.

For this study, investigators from the Bloomberg-Kimmel Institute collaborated with researchers from the Fred Hutchinson Cancer Research Center in Seattle, Washington, along with 11 other U.S. medical centers.

In the 50-patient study of pembrolizumab as the initial treatment for patients with recurrent, locally advanced or metastatic Merkel cell carcinoma, more than half of the patients (28 patients, 56%) had long-lasting responses to the treatment, 12 of whom (24%) experienced a complete disappearance of their tumors. Nearly 70% of patients in this study were alive two years after starting treatment.

?This is the earliest trial of immunotherapy as a front-line therapy for Merkel cell carcinoma, and it was shown to be more effective than what would be expected from traditional therapies, like chemotherapy,? Topalian noted, who is a Bloomberg-Kimmel professor of cancer immunotherapy at the Kimmel Cancer Center.

“Immunotherapy provides an effective treatment for patients with Merkel cell carcinoma who before had few options. Immunotherapy is unique in cancer treatment, because it does not directly target cancer cells but rather removes constraints on the immune system?s natural ability to find and destroy cancer cells,” she added.

Commenting of the results of the study, LSU Health New Orleans’ Adam Riker, MD, FACS, Professor and Chief of Surgical Oncology, who led the study at its School of Medicine and Stanley S. Scott Cancer Center, said that “…this study shows the amazing ability of our immune system to fight off and destroy an aggressive form of skin cancer called Merkel cell carcinoma.”

A total of 50 participating patients in this study were treated at 13 centers across the United States in a clinical trial conducted by the Cancer Immunotherapy Trials Network, which is sponsored by the National Cancer Institute (NCI). The Kimmel Cancer Center, where much of the medical science contributing to the development of pembrolizumab unfolded, was a lead institution.

Preliminary findings regarding the first 26 patients enrolled in the study were published in the New England Journal of Medicine in 2016. The study was subsequently amended to add 24 more patients.

Orphan disease
The National Institutes of Health (NIH) classifies Merkel cell carcinoma as an ?orphan disease,? as it is diagnosed in fewer than 2,000 people annually in the United States. It typically occurs in older people and those who have suppressed immune systems. About 80% of Merkel cell carcinomas are caused by a virus called the Merkel cell polyomavirus. The remaining cases are attributed to ultraviolet light exposure and other, unknown factors.

In the study, treatment with pembrolizumab worked well against both virus-positive and virus-negative Merkel cell carcinomas, resulting in high response rates and durable progression-free survival in both subtypes. The findings also showed that tumors expressing a PD-1-related protein called PD-L1 tended to respond longer to treatment, although patients whose tumors did not express PD-L1 also responded.

?These findings could be a precursor to developing more effective treatments for other virus-related cancers, which account for about 20% of cancers worldwide,? explained Sharfman, the Mary Jo Rogers Professor of Cancer Immunology and Melanoma Research.

The non-virus-related subtype is characterized by high numbers of genetic mutations in cancer cells, which has also been shown by the Bloomberg~Kimmel Institute group to be a biomarker of response in various cancers to checkpoint inhibitors such as pembrolizumab.

Mode of action
Pembrolizumab works against Merkel cell carcinoma by blocking PD-1, a molecule on the surface of immune cells that regulates immune responses, turning them on and off. Cancer cells often manipulate PD-1 to send a ?stop? signal to the immune system. Blocking that signal with a checkpoint inhibitor, such as pembrolizumab, initiates a ?go? signal, sending immune cells to attack cancer cells. A protein on the surface of cancer cells, called PD-L1, is one mechanism cancer cells use to manipulate PD-1 and disrupt the immune response.

“Blocking this specific receptor in our bodies, results in a super charging of our immune system to both recognize and destroy cancer cells. The overall impressive results show that this form of immunotherapy is quite effective, giving us an important treatment option for patients with Merkel Cell Carcinoma that has spread within the body.” LSU Health New Orleans’ Adam Riker added.

?Under the microscope, PD-L1 looks like an armor around the cancer cell, … and Pembrolizumab interrupts PD-1 signaling by blocking the communication between PD-1 and PD-L1, removing the stop signal and re-engaging the immune system to go after cancer cells,? explained Taube, an associate professor of oncology, dermatology and pathology

Patients participating in the study received the immune checkpoint blocking drug pembrolizumab intravenously every three weeks for up to two years. During this time, the status of their cancer was monitored periodically with imaging scans.

While, overall, most patients tolerated the treatment well, nearly all of the participants (96%) experienced some type of treatment-related side effect, and seven patients (14%) discontinued the trial because of them. Furthermore, 28% of patients experienced serious side effects, including one treatment-associated death.

The authors note that one death occurred in a 73-year-old patient with widely metastatic Merkel cell carcinoma and pre-existing atrial fibrillation who withdrew from the trial and died 10 days after a single infusion of pembrolizumab.