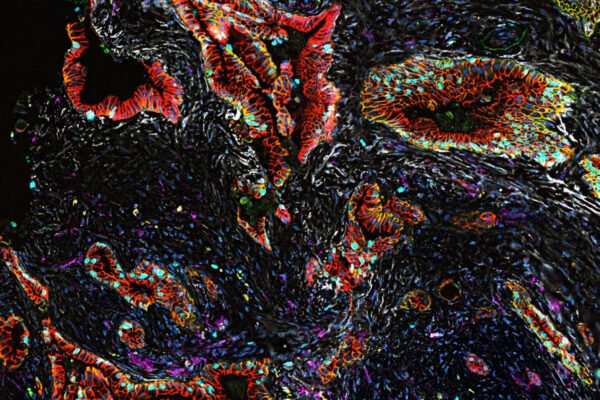 Pancreatic cancer has few treatment options and limited survival, with only 9% of patients still living five years after diagnosis.

But a detailed analysis of pancreatic cancer by researchers at Washington University School of Medicine in St. Louis, MO, has revealed details of two key transition points in the development of these tumors — the shift from normal cells to precancerous cells, and the change from precancerous to cancerous cells. Understanding these transitions will help lead to the development of novel therapies. The study,  supported by the National Institutes of Health (NIH), also provides insights into treatment resistance and how immunotherapy could be harnessed to treat this aggressive tumor type.

The study, published in the August 22, 2022 edition of Nature Genetics, is part of the Human Tumor Atlas Network, funded by the National Cancer Institute’s Cancer Moonshot program, all part of the National Institutes of Health (NIH).

Also, as part of an ongoing phase 1 immunotherapy clinical trial at Siteman Cancer Center — based at Barnes-Jewish Hospital and Washington University School of Medicine — the researchers are conducting the same detailed analyses performed in the current study to see how tumors from patients respond to two investigational drugs that prime the immune system to attack the cancer.

“Pancreatic cancer is so difficult to treat, and to develop better treatments we need to understand how normal, healthy cells in the pancreas transition to becoming cancerous,” said co-senior author and computational biologist Li Ding, Ph.D., the David English Smith Distinguished Professor of Medicine and a professor of genetics.

“This marks the first time these transitions have been mapped out in such detail in human tumors. Our findings are jumping-off points for the future development of new treatment strategies for this deadly cancer.”

The researchers conducted a deep analysis of the genetics and protein manufacturing of 83 pancreatic tumor samples donated by 31 patients who participated in the study. They noted how the tumors differed across the volume of the tumor and at various times as the patients underwent treatment.

“We have a lot of snapshots of these tumors, but what we really need is a movie,” said co-senior author Ryan C. Fields, MD, the Kim and Tim Eberlein Distinguished Professor. “It’s very hard to study these tumors in patients across the spectrum of treatment. The point of the Human Tumor Atlas Network is to document the tumors across space and time so we have more of a continuous movie rather than distinct snapshots.”

Ding, Fields, and their colleagues, including fellow co-senior author David G. DeNardo, Ph.D., a professor of medicine, mapped out two key transition points in the development of pancreatic cancer. One involves the shift normal pancreatic cells make as they become precancerous. And the second transition point involves the shift from precancerous cells to early cancer cells. Future studies will focus on a third key transition point: that of the original tumor shifting to metastatic disease, which spreads to other parts of the body.

Beyond maps of the transitions, Ding and her colleagues determined the characteristics of cells in these transitory states, opening the door to future strategies to detect cells that are not yet cancerous but are on their way, which could lead to the development of ways to prevent the onset of cancer.

Another key finding relates to a new strategy for so-called checkpoint immunotherapy, which has proven ineffective in attacking pancreatic tumors. The researchers identified a new combination of signaling molecules that could potentially prove useful in targeting T cells to pancreatic tumor cells. Such a treatment would also “take the brakes off” the T cells to kill those cancer cells.

“The surface molecules that make traditional checkpoint inhibitors work on other cancers are simply absent in pancreatic tumors,” Ding said.

“We basically found a parallel interaction using two different molecules that are present in pancreatic cancer. We are excited about the prospect of exploring this interaction as a way to develop a new type of checkpoint immunotherapy for this tumor type.”

Over time, most pancreatic tumors develop resistance to chemotherapy, and the new study reveals what Ding calls a chemo-resistance signature that characterizes how the tumors change and adapt to survive even in the face of chemotherapy.

The researchers found that a threefold increase in inflammatory cells surrounding the tumor — called inflammatory cancer-associated fibroblasts — is strongly associated with resistance to chemotherapy.

“These findings suggest that targeting the inflammatory fibroblasts in the tumor microenvironment may be key to overcoming chemo-resistance in these treated tumors,” Ding said.

Overall, the study presents a number of new strategies and areas to explore in pancreatic cancer research. Ding, Fields, and DeNardo are working on preclinical animal models to determine which are most promising to investigate in future human clinical trials.

Featured image: A new study from Washington University School of Medicine in St. Louis has revealed the details of two key transition points in the development of pancreatic cancer. The study provides insights into treatment resistance and how immunotherapy could be harnessed to treat this aggressive tumor type. Shown is a human pancreatic tumor. Cell nuclei are in blue; cell membranes are in red; proliferating cell nuclei are in cyan. Other colors highlight different kinds of immune cells and cells of connective tissue. Photo courtesy: © 2016 – 2022 Washington University School of Medicine. Used with permission.