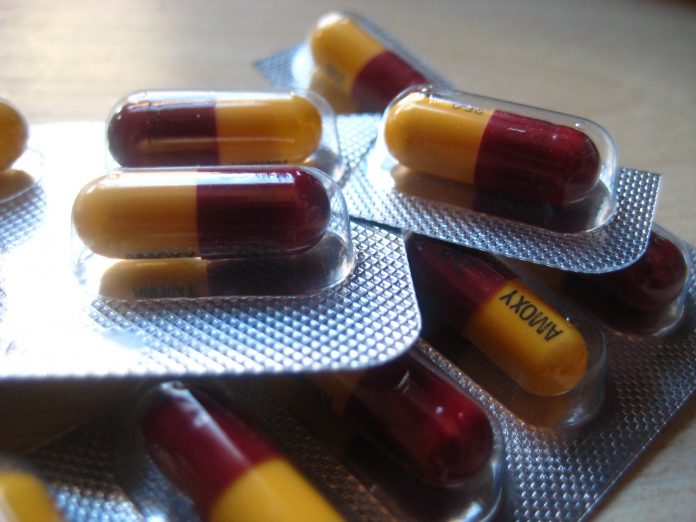 In an extensive “data mining” analysis of British medical records, funded, in part, by the Fisher Center for Environmental Infectious Diseases, confirms that taking even a single course of antibiotics might boost the risk of developing colon cancer a decade later.

While the study by researchers at the Johns Hopkins Kimmel Cancer Center shows that this is a slight risk, they observe that this risk is not seen in the development of rectal cancer.

The findings, reported in the August 20, 2019 issue of the journal Gut, a BJM publication, highlight the need for judicious use of this broad category of drugs, which are frequently improperly or overprescribed, the report authors say.

“The primary message of this study is the importance of antibiotic stewardship: not treating common viral infections with antibiotics, using them for the shortest time period possible, and using targeted antibiotics rather than broad spectrum ones,” explained study leader Cynthia L. Sears, M.D., Bloomberg~Kimmel Professor of Cancer Immunotherapy at the Johns Hopkins Kimmel Cancer Center.

“This research adds to our understanding that these drugs can have significant off-target effects, including the induction of chronic illnesses,” she added.

… the importance of antibiotic stewardship… not treating common viral infections with antibiotics, using them for the shortest time period possible, and using targeted antibiotics rather than broad spectrum ones…

Cause and effect
Sears cautions that medical records studies like hers are not designed to demonstrate cause and effect, but to identify possible associations between risk factors and disease. But she notes that because the database held so much specific information over a long period of time that the study authors concluded that the most likely explanation for the bump in colon cancer risk is the radical change that antibiotics wreak on the microbiome–the collection of bacteria that live in the intestines.

Antibiotics are widely prescribed throughout the world to treat bacterial infections, and there is growing evidence, including several epidemiological database studies, that link use of these drugs to the risk of colorectal cancer, explains Sears and Jiajia Zhang, M.D., M.P.H., a Bloomberg~Kimmel Institute for Cancer Immunotherapy researcher.

Drawbacks
However, the investigators say, these past studies have had a variety of drawbacks, including failure to control for other colorectal cancer risk factors such as family history, history of obesity, smoking, alcohol use, and diabetes, recall bias in patients’ recollections about antibiotic use, failure to separate data about colon and rectal cancers, and too few study participants to produce meaningful conclusions.

To learn more about the association between antibiotics and colorectal cancers, Sears, Zhang, and their colleagues mined data from the Clinical Practice Research Datalink (CPRD), one of the world’s largest electronic medical record databases of “anonymized” clinical records, information that does not identify individual patients. CPRD holds information on more than 11 million patients in the U.K., including data on drug prescribing and diagnoses, making this study the first population-based study to examine the association of antibiotic exposure and risk of colorectal cancer.

Focusing on a 23-year period from January 1, 1989, to December 31, 2012, the researchers found 28,890 cases of colorectal cancer. They matched each of these patient records with up to five healthy “controls” who never developed this disease, but who had similar characteristics, including age, gender, and where their general practitioner practiced, for a total of 137,077 “control” cases for comparison.

They then used the medical records to identify and evaluate each case history for colorectal cancer risk factors, such as a history of obesity, smoking, alcohol use, and diabetes, as well as antibiotic use.

As expected, the researchers found that those patients who developed colorectal cancer were more likely to have one or more of the known risk factors. However, when they accounted for these factors in their statistical evaluation, they found that those who developed colon cancer were slightly more likely to have been exposed to antibiotics (71.3% compared to 69.1%). Those with rectal cancers did not show that association and had about the same antibiotic exposure compared to healthy subjects.

Further investigation showed that antibiotic exposure was only associated with increased risk of approximately 15% for cancer in the proximal colon (the first and middle parts of the colon) but not the distal colon (last part of the colon), and this risk happened particularly after exposure to classes of antibiotics that kill anaerobic bacteria, such as those in the penicillin family.

Although antibiotics are most often highly effective at eradicating bacterial infections, Sears explains, they also can change the balance of the gut biome by killing beneficial bacteria and allowing pathogenic ones to thrive. Some of these surviving bacteria could be carcinogenic, encouraging polyps to grow and develop into malignant tumors.

Probiotics
Sears noted that in recent years probiotic-rich foods and supplements have become popular, in part to address gut biome imbalances. But the data on probiotics is mixed, she adds, with some studies showing positive effects and others showing no effects or negative effects of using these supplements.

“Rather than trying to add beneficial bacteria back to the intestines,” a better way to avoid potentially increased colon cancer risk from antibiotic use is through more cautious prescribing of antibiotics,” Sears cautioned.