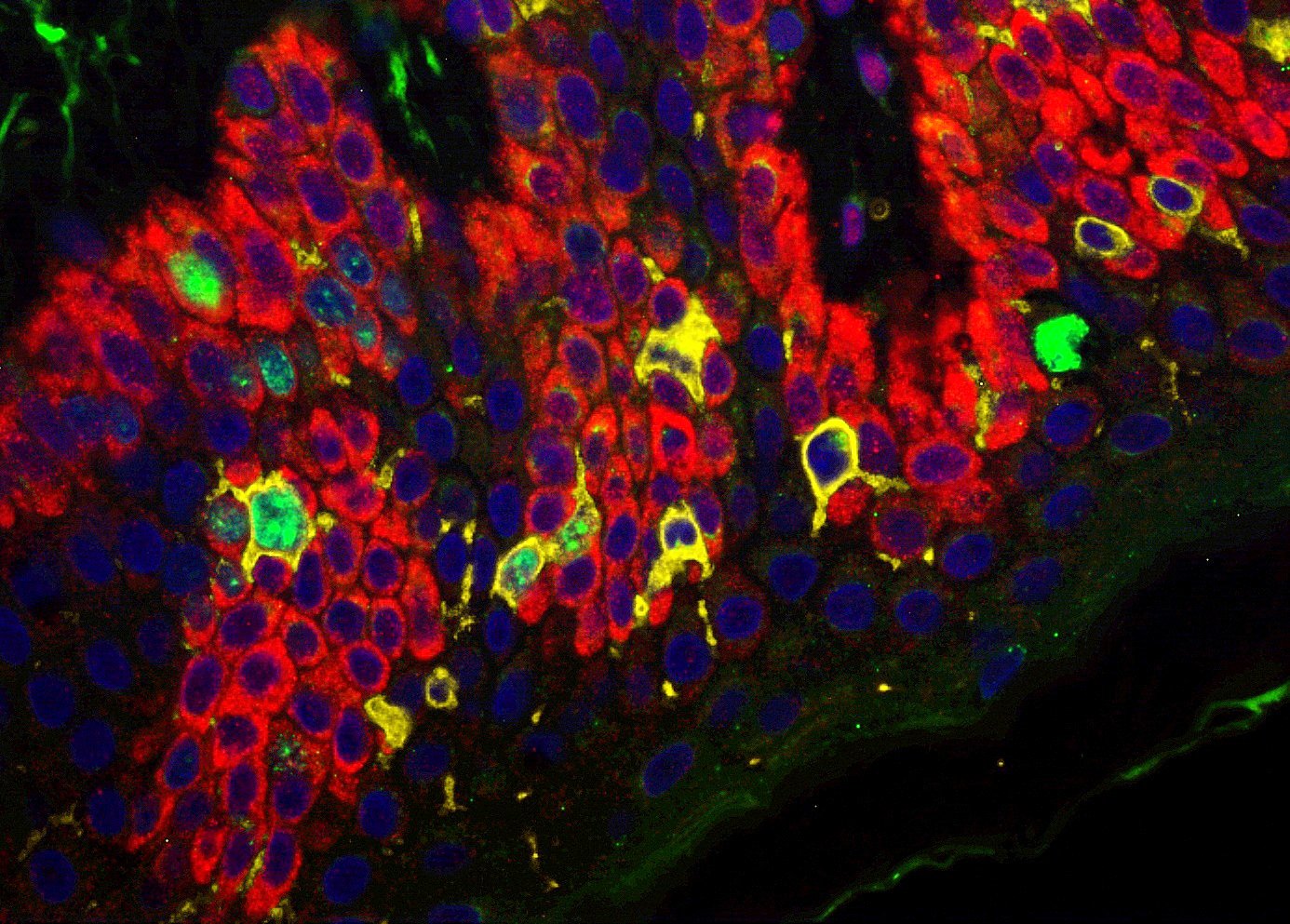 Dendritic cells are unique hematopoietic cells. Considered the most powerful antigen-presenting cells, known as accessory cells, they play an important part of the immune system. Their main function is to process antigen material and present it on the cell surface to T-cells governing T-cell immunity.  They also act as messengers between the innate and the adaptive immune systems.  Being highly specialized defense cells, dendritic cells are regarded as the ‘cellular outposts’ of the immune system. Dendritic cells play distinct roles in shaping T-cell development, differentiation and function. [1]

Scientists at the Medical University of Graz, Graz, Austria, have investigated how the immune system can tolerate harmless cells while inducing immunity to pathogens. The findings have been published in the April 27, 2021 edition of the journal Cell Reports.[2]

At the Otto Loewi Research Center at the Medical University of Graz, a study conducted by a team led by Professor Herbert Strobl, MD., of the Division of Immunology and Pathophysiology and Ph.D. student Victoria Zyulina in close cooperation with Jose M. Silva, MD, Associate professor Pathology, Molecular, and Cell-Based Medicine and Associate professor Oncological Sciences at the Icahn School of Medicine at Mount Sinai, New York, New York, attempted to shed light on the mechanism underlying the development of dendritic cells with tolerogenic versus immunogenic properties.

“We know that dendritic cells are responsible for effective immune responses to microbes such as dangerous viruses. The body accomplishes this through the generation of specialized DC subsets as well as through biochemical signals,” said Herbert Strobl.

The epithelia of the skin and mucous membranes contain Langerhans cells (LC), a subtype of immune cells that possesses tolerogenic properties as well as the ability to renew itself. The tissues below and inflammatory lesions contain cells with proinflammatory properties called monocyte-derived dendritic cells or moDCs

Regulation of processes in cells and tissues
RNA molecules are highly important in the biosynthesis of protein molecules. Protein-coding RNA molecules were recently employed to develop a vaccine against COVID-19. However, RNA molecules can also exhibit negative regulatory effects. In 2006 a Nobel Prize was awarded for the discovery of the process of RNA interference.

Over the past 20 years, it has become apparent that many important biological processes in cells and tissues are regulated by microRNAs—small non-coding RNAs. A flaw in the biosynthesis of these microRNAs leads to abnormal development and function of dendritic cells. The researchers concentrated on the molecular mechanisms regulated by specific microRNAS in the development of subsets of dendritic cells. They specifically looked for microRNAs formed by these subsets of dendritic cells mentioned above (LC versus MoDC). The researchers found that miR-424(322)/503 is much more highly regulated in proinflammatory moDCs than in LCs.

In addition, moDC subgroups in the skin of mice that lacked miR-424 (322)/503 were significantly reduced under inflammatory conditions as compared to normal mice.

“The data confirmed our studies of human cells that indicated that the differentiation of moDCs from LCs is dependent on miR-424 (322)/503,” Victoria Zyulina noted.

Regulated pro- vs. anti-inflammatory
Finally, the scientists determined that genes in the TGF-beta signaling pathway are highly regulated in dendritic cells precursor cells. In accordance with this, the loss of miR-424/503 in DC precursor cells favors TGF-beta1-dependent LC differentiation at the expense of moDC differentiation.

“That is why we proposed a model in which miR-424(322)/503 functions as a molecular switch that uses modulation of TGF-beta signaling to decide whether tolerogenic/anti-inflammatory LCs or proinflammatory moDCs are formed,” Zyulina explained

The clarification of this mechanism has contributed to the understanding of how our immune system can induce tolerance to harmless molecules and microbes while inducing immunity to dangerous pathogens. Follow-up studies will show whether a therapeutic intervention targeting this switch provides an opportunity to regulate abnormal immune responses in allergies, autoimmune diseases, and malignancies.