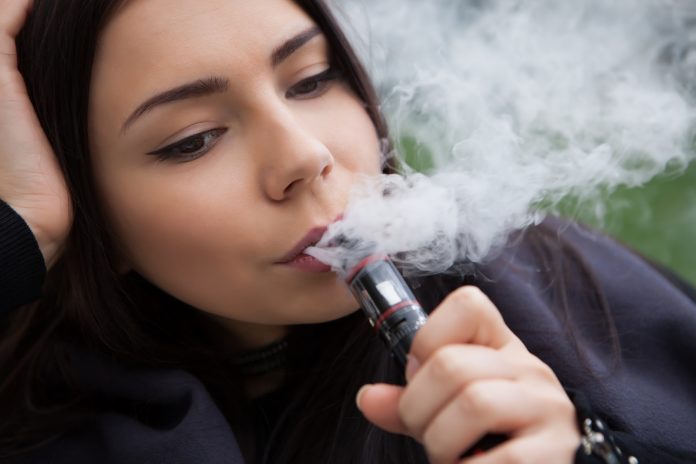 A comprehensive analysis, funded in part by the National Cancer Institute, examined the relationship between vaping and smoking among youth and young adults. The study, published in the journal Tobacco Control, shows that cigarette smoking dramatically decreased between 2013 and 2017 just as e-cigarettes and vaping use became more popular. The study specifically looked at five different U.S. population-level surveys that covered the four year time frame in which vaping became increasingly popular.

“We found a strong and consistent inverse relationship between vaping and smoking across the different datasets for both youth and young adults,” noted David Levy, PhD, professor of oncology at Georgetown Lombardi Comprehensive Cancer Center, a National Cancer Institute designated comprehensive cancer center.

“This finding is important because it indicates the country experienced a major reduction in youth and young adult cigarette smoking when vaping became more popular,” he says.

Levy further noted that a number of other studies, including one released in 2018 by the National Academy of Sciences, did not reach the same, robust, finding because they relied on one survey that covered a shorter span of time.

Different surveys
Data on youth and young adult cigarette use was obtained from five different, large scale national surveys: the Monitoring the Future (MTF) Survey, the National Youth Tobacco Survey, the Youth Risk Behavior Survey, the National Survey of Drug Use and Health, and the National Health Interview Survey. These surveys asked about vaping, some as early as 2011, and they indicate that vaping occurred at relatively low levels from 2011-2013, but at much higher levels by 2014.

“We see that 2014 was a tipping point year when vaping became popular, and cigarette use then declines much more rapidly than in previous years,” Levy says.

Vaping vs. smoking
“The data shows consistent, accelerated reductions in youth and young adult smoking prevalence as vaping becomes more widespread,” Levy says. “Vaping has had a positive effect on reducing cigarette smoking. On a population level, any effect that vaping may have had act as a gateway to cigarette smoking during the time frame examined appears to be small relative to the effects of vaping leading to less smoking,” Levy noted.

Nicotine salts
He points out that the survey used in this analysis were before the popularity of JUUL, a different type of e-cigarette ‘vaping’ device. The product has become so popular that it accounted for about 40% of the total e-cigarette market, grossing US $ 150 million in retail sales in the 3 month period between April – June 2018. [2]

Researchers noted that JUUL, which uses a proprietary e-liquid formula (JUULsalts) based on the ‘nicotine salts’ found in leaf-based tobacco rather than free-based nicotine, contains high levels of nicotine (0.7?mL or 59?mg/mL per ‘pod’) and are less harsh than vape from traditional e-cigarettes. As a result of the higher nicotine content, the product is said to deliver a nicotine peak in about 5?minutes, giving the user an experience more like combustible cigarette smoking than found with other e-cigarettes products, making it more appealing to both young and adult smokers. [3][4]

“We need to continue to study the use of e-cigarettes, including Juul, with the goal of reducing harmful cigarette smoking but also to prevent underage youth from using any nicotine delivery system, especially cigarettes,” Levy says.

Not as dangerous?
While e-cigarettes and vaping may help in reducing the number of people who opt for traditional cigarette smoking, it is not without health risk. Instead of ‘combustion’ or ‘burning’ tobacco, vaping products release an aerosol that is inhaled.

It would, however, be a mistake to assume that this aerosol is harmless.? Research shows that this aerosol ‘vape’ includes fine particles containing toxic chemicals. Many of these chemicals have been linked to cancer, as well as respiratory and heart diseases.

Furthermore, the idea that the main ingredient in aerosol vape, nicotine, is harmless is not correct either. The fact is that nicotine is one of the most toxic of all poisons and has a rapid onset of action. It is also one of the most addicting agent. According to the US surgeon general (2010), nicotine is as addictive as cocaine or heroin.?[5][6]

Nicotine alone has negative effects on metabolism and increases cancer risk. And according to Jonathan Winickoff, MD, MPH, a primary care physician and tobacco researcher at MassGeneral Hospital for Children, in Boston, Massachusetts, there is evidence that shows teens who vape experience more respiratory problems including coughing and wheezing symptoms, as well as more asthma attacks.

Warning about the addictive effects of nicotine and vaping, Winickoff says, referring to JUUL, that “…a single cartridge can contains more nicotine than a whole pack of cigarettes. [This presents] major health concerns for children through young adulthood. Youth who use e-cigarettes are more likely to go on to smoke traditional cigarettes at some point in the future.”

Winickoff also explains that addiction to nicotine at a young age causes brain remodeling, changing the threshold for addiction to other substances: “I want to emphasize again that not only is the aerosol dangerous for your lungs, the worst part about e-cigarettes is that the developing brain of teenagers and young adults is exquisitely sensitive to nicotine. The reward center of the brain becomes hungry for nicotine and other drugs of abuse. The person who uses e-cigarettes is much more likely to go on to smoking regular cigarettes, become a nicotine addict and is also more likely to progress on to other drugs.”